On Thursday, March 12th, I had a friend over in the morning with her son. My friend and I talked on the couch while her son played happily in the playroom. It was nice to catch up and enjoy community together. We talked briefly about the coronavirus, but it wasn’t our main topic of discussion. It’s crazy the difference a day makes. I had no clue on the March 12th all that would unfold on the March 13th. I heard people making jokes about Friday the 13th, but I put no stock in such superstitions. And then it seemed that everything changed on that Friday the 13th.

We’ve had one week of our new routine and so far, so good! The weather has been sunny and that is a huge part of this week’s success. The boys have had plenty of outside time to play. We’ve found a good flow with doing schoolwork in the mornings, resting in the afternoons, and playing in the evenings. The days have been different, but different isn’t bad. This change has been good.

Our two hour window for school includes reading, writing, math, crafts, music, games and exercise. We pause for snacks. I’ll stop to move the laundry along. It’s been a relaxed pace with no stress, rush, or deadlines. Our extra free time has been spent outside. Next week when the rain comes back, we’ll focus on building blanket forts, watching movies, baking together. Next week is also Jeremy’s birthday, so we can pour ourselves into birthday prep – making cards, making a special dessert, decorating the house to celebrate.

We’ve celebrated as much as possible this last week. St. Patrick’s Day and the first day of spring gave us plenty to get excited about! For St. Patrick’s Day, we watched a video about St. Patrick and why we celebrate him. We also watched a Riverdance video and a time-lapse video of dying the Chicago River green (that was the favorite). I’ve been playing instrumental music around the house, so on Tuesday we listened to Celtic/Irish music. We did some St. Patrick’s Day coloring sheets. I attempted to dye as many things possible green at dinner, but the boys weren’t a fan. Graham did eat the green pancakes, but passed on the green eggs. Our small gift to the boys for St. Patrick’s Day was a set of glow in the dark stars for their bedrooms. Since they glow green, Jeremy and I felt like the gift was on theme. The stars were a big hit and the boys enjoyed putting them up on their walls.

The first day of spring was a little less exciting than St. Patrick’s Day. Our craft for the day was supposed to be painting flowers, but the boys wanted to paint space images instead. I didn’t mind since they were being creative. We read a book about apples growing (starting at blossoms in spring) and played Hi-Ho Cherrio (math). We talked about the cycle of the seasons and how everything is waking up and coming alive again. Once it warmed up, we went outside to document signs of spring. We found flowers, seed pods and a few green leaves starting to form on trees.

When I look at the week we’ve had, I am hopeful for the remaining weeks ahead. We’ve had a great time at home. The boys are living an adventure everyday. I’m thankful for the friendship they share. I’m thankful for the exploration they’ve done in the sunshine. I’m thankful for the time they’ve had to play. The boys know that there is a virus going around that it makes certain people sick. They know that our risk level is low, but we are staying home to make sure other people don’t get sick. The boys aren’t showing signs of stress or fear (they don’t quite understand the magnitude of this crisis). Jeremy and I are careful about our own attitudes and what we are reflecting to the kids. We are trying to make life as normal and as fun as possible right now.

When I first thought about being home for six weeks with the kids, my first concern was their education. I’ve calmed down a bit from the initial concern I felt. I had a friend share that 2-3 hours a week of academic time wards off the brain drain that kids experience over a long break. I still plan on taking our spring break at the beginning of April. I’m not sure what we’re going to do with no play dates or outings, but we’ll take a true break from the new routine we’ve started. As much as I miss sending my boys to school, I love that I’m not making a lunch every morning or waking up kids to get ready. Owen has been staying up a little later than usual to use the telescope before bed. He has been sleeping in and resting during nap time. I know this is good for him. Graham loves having Owen home as his buddy. Even though they fight, I love watching their friendship. I’m glad they have each other during this time.

We are forging a new normal and it’s been good. I’m all for slowing down. I’m all for having fun. I’m all for making the most of teachable moments. When my boys reflect on this unexpected break, I’m hopeful they will remember it as a positive adventure. So far, so good. Possibly five weeks more to go! 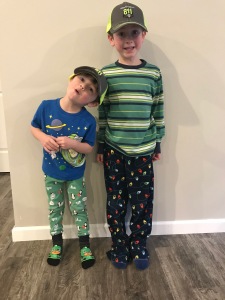 Our crazy St. Patrick’s Day outfits. We are living life in our pajamas these days. We do change into clean pajamas each morning. 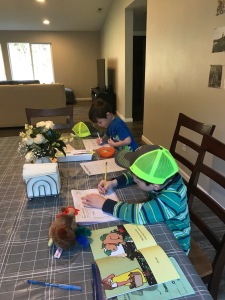 Day two of school around the table. 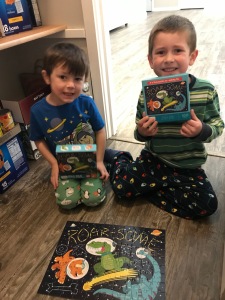 A glow in the dark puzzle needed to be assembled in the pantry so we could see the end results. 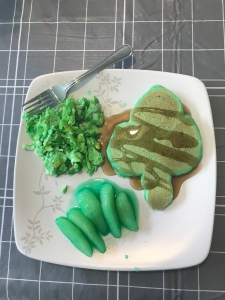 My attempt at pancake art to look like a clover, green eggs, and green pears. 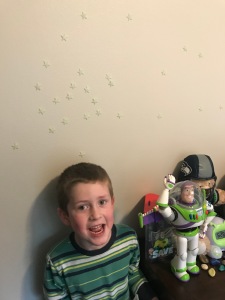 Stars on the wall and saying “space!” 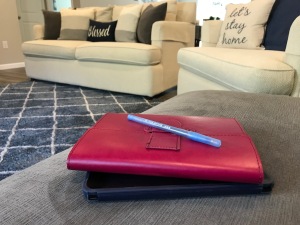 The boys have been hitting the trails in the evening, so I get a few quiet minutes alone. Time to journal and read my digital library book. 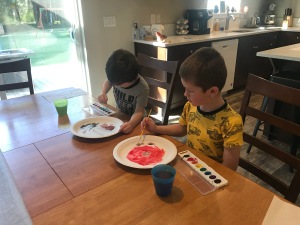 Painting stars and black holes instead of flowers. 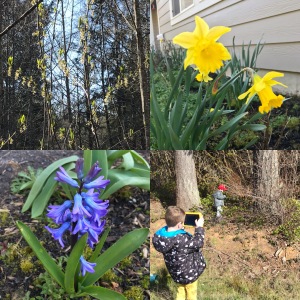 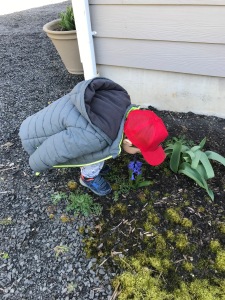 Pausing to smell the flowers 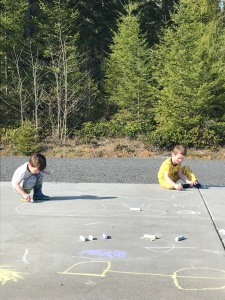 Thankful that the “neighbors” let us draw with chalk on their driveway!