As promised, our family pictures are featured in the photos of this post. My sister-in-law’s sister took them for us. This is her third time taking pictures for us over the years. I was so glad she was available because 1) we know her and 2) she’s very reasonable when it comes to cost. I don’t “enjoy” taking pictures and the weather never fails to stress me out. I’m always glad that I go to the hassle every year. It’s great to have pictures for the Christmas card. And it’s wonderful to display pictures of my kiddos growing year by year. Owen also had school pictures this year. Once Graham has his school pictures this spring, I’ll create a space on my walls to display school pictures alongside family pictures. For school pictures, Owen told me they took his picture twice. I figured that meant that photo number one was no good and a second one was necessary. With that in mind, I had low expectations of school pictures. And I was sort of right. It’s not a terrible picture, but Owen has some crazy eyes going on that look like the flash photography stunned him. I could do re-takes, but I really have no hope for a better outcome, so we will accept the crazy eyes. Oh and one last thing about family pictures – we took them at our house which is super special to me and Owen got pictures of his chickens, which was super important to him!

This week’s projects for me included Candy Corn Blondies. I found a recipe on Pinterest a few years ago as a way to use up extra candy corn in the house. Now it’s a fall tradition for me to make this treat. This batch turned out especially good despite the fact that the blondies broke in half while I was taking them out of the pan. We’ll call that a rustic cut. No biggie. My other great accomplishment this week was finishing Emma. I’m now one book away from finishing my Jane Austen mission. I’ve saved Pride and Prejudice for last. I have a feeling it will be the best for a grand finale. I am pausing though shortly to read Sarah Bessy’s new book, Miracles and Other Reasonable Things. It went on sale this week and I couldn’t pass up the deal. I have been deeply moved by Sarah’s writing over the years so of course, I couldn’t wait until my Austen marathon was finished. Sarah comes first!

Thursday I got our family a pizza shaped like a pumpkin from Papa Murphy’s and we had a family game night. Owen and Graham had a sleepover with Nana & Papa on Friday, so Jeremy and I could attend a conference on Friday and Saturday. I wanted to make sure that we had a good amount of family time on Thursday before being separated for part of the weekend. The conference was for Love & Logic which I really appreciate the strategies and the heart of the message. The conference gave us all useful tools that we could put into practice right away. Also it was great for Jeremy to join me because I’ve been into Love and Logic for a few years now, but now I feel like we are on the same page as a couple. It’s a wonderful feeling! While Jeremy and I were busy, Owen and Graham were living their best lives. They got to ride bikes with family, pet puppies, play games, go to the movies. It was a great weekend for them.

We wrapped up our weekend with a trip to the corn maze and our first pumpkin patch of the season. One of the hardest things about the conference was the weather – it was too nice to be inside and my soul was longing to be outdoors doing autumn activities. Today was our chance to make good on the weather and the fall fun. The corn maze we visit has two mazes. Each boy gets to guide us through a maze. Both kids went in a small circle this year and tried to go back out the entrance like we did the maze in record time. It was so hilarious and i guess if the goal is get “out” quickly, they succeeded! We don’t usually go to this pumpkin patch, but we are short one of our “usual” patches this year, so I thought why not. The boys picked unique pumpkins – a white one for Owen and a bumpy for Graham. After our outing, we went shopping at Costco and got dinner there. Owen acted like it was the best experience of his life getting to eat at Costco. I loved it! It’s the little things in life!

And onward to start another week! I hope you enjoy the family pictures below. 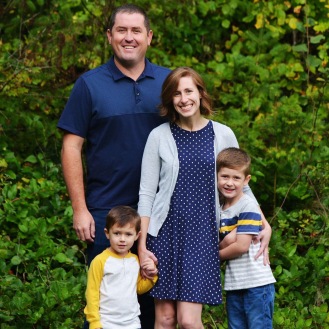 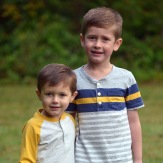 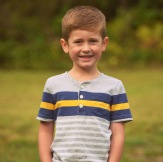 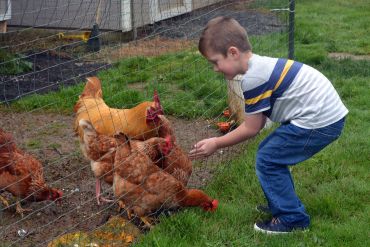 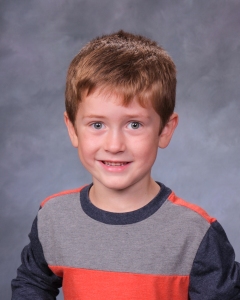 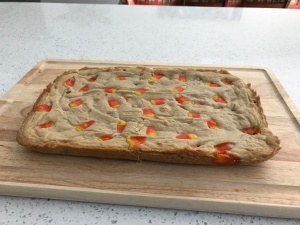 Candy Corn Blondies have become an annual tradition! So good! 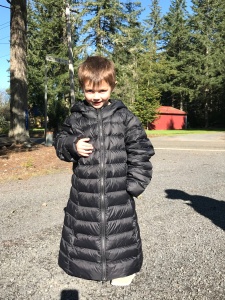 This is what happens while we wait for the school bus on a very cold day. 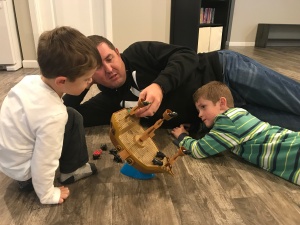 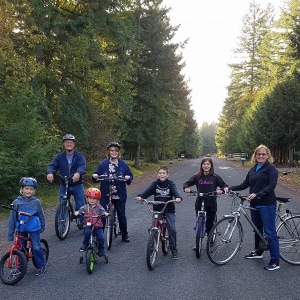 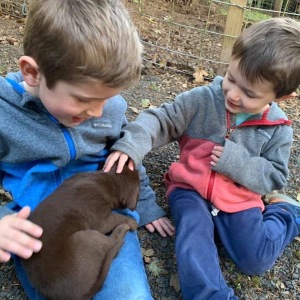 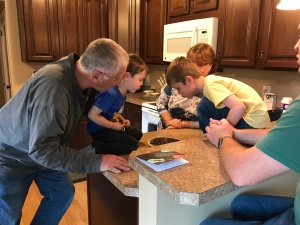 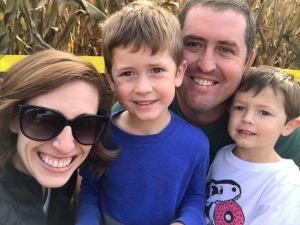 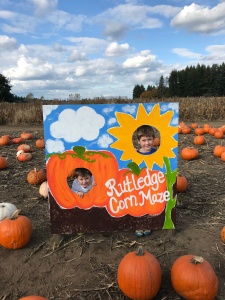 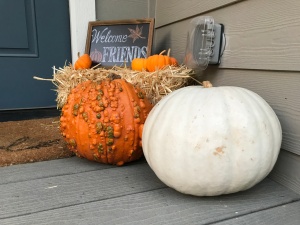 Owen wanted a white one and Graham wanted a bumpy one!