We just got back from a fantastic vacation to the California Redwoods and the Oregon Coast! On a whim, we decided to leave a day sooner than planned. After church on Sunday, we drove south to Cottage Grove, OR. Monday was supposed to be a long travel day to Crescent City, CA. By leaving a day early, we broke up our longest drive into two parts. And it started the fun of vacation sooner! It was a total win!

On our way down to Cottage Grove, we stopped at playground in Albany to make dinner. It was our goal to bring our own food on this trip to save money and eat less fast food. We succeeded in that goal since we didn’t get fast food once on our adventure. And by eating our own food, we found many playgrounds to stop at so the boys could stretch their legs as well eat. However, I will admit that by the end of the trip our family had no enthusiasm left for PB&J sandwiches.

We got into our hotel in Cottage Grove and we were ready to swim. They boys got plenty of pool time over the course of  the trip and they loved every second of it. To make me happy, Jeremy took us on an adventure to find all the covered bridges that surrounded Cottage Grove. I found some information about them before we left for our trip and I had shared how cool I thought it would be to see them. Jeremy totally made it happen! It was a very picturesque way to spend the evening before heading to bed.

Monday, we had lunch in Grants Pass, OR at a playground before making our way into California on the Redwoods Highway. Jeremy’s goal for Monday was to find the Grove of the Titans which features some of the biggest trees in the Redwoods. Jeremy & I visited the Redwoods seven years ago and after that trip Jeremy started to research the tress in the area. It’s been on his bucket list to find certain trees and we did our best to make those dreams come true. These big trees are off trail and Jeremy did careful research to find where we needed to divert from the well marked trails. I’m not a big nature girl and I was terrified of poison oak the whole time. I was pleased to find that the hiking on and off the trails wasn’t too hard and we certain did find some giant trees. I am so happy that we were able to accomplish Jeremy’s dream. I did joke with him though that if we continue to hike as a family, I’m going to need to invest in hiking apparel! The boys love hiking and the redwood trees captured their hearts just like their father. The boys were totally in their element. While I was paranoid about poison oak, they adventured onward without a care in the world.  After the Grove of the Titans, we checked into our super cute cabin and went into Crescent City for dinner and to put our toes in the ocean. Oh, I should also mention that Monday was Jeremy and I’s 13th wedding anniversary. It was a bit overshadowed by the trip, but that is okay. If you would have told me 13 years ago that I would hiking off trail with my 3 boys on July 8th, I would have laughed! I’m grateful for the life I have with Jeremy and the ways that stretches me. There has never been a dull moment with him in my life.

Tuesday was more redwood trees and beaches. We went through Lady Bird Johnson Grove where Owen wanted me to take his picture inside every hollowed out tree we passed. Over the course of the entire trip, I took about 1,000 pictures. I’m sure 400 of them are of that grove and those trees… We also did a drive thru tree because, why not? We made it back to Crescent City in time to buy a Papa Murpy’s pizza (Owen’s current fav) and bake it at our cabin. After dinner and doughnuts for dessert, we went back near the Grove of the Titans to find more trees. It was a full a day of tree sightings and beach combing. I can’t even count how many rocks and shells Owen collected on this trip!

Wednesday was a our transition day from California to Oregon. We were all sad to say good-bye to the cabin. It had been a good home base for us. It felt secluded but close to the main road. It had no television or wi-fi so we felt disconnected and rustic without being too far off the grid. I’m not sure if we’ll get a chance to stay there again, but if the opportunity came up, I would for sure do it again. On Wednesday travels included stopping at the Cape Blanco Lighthouse where we learned that Graham is too short to go to the top of most lighthouses. Bummer. We stopped at the park in Bandon, OR for a playground lunch before heading off to the Sea Lion Caves. The boys loved the caves and it was fun to visit them again. Jeremy and I spent our first anniversary in the Lincoln City area and had visited the caves on that trip. When we made it into Newport that evening, we had dinner at the original Mo’s which was a highlight for me. The boys’ drinks came with a toy shark on the straws and they were the perfect “free” souvenirs! We checked into our hotel that night and let me say… it was scary. I was worried about bed bugs. Jeremy was concerned that our floor sank down in the middle of the room. We did have a view of the ocean which the boys loved. We swam in the pool that evening and I prayed for no rashes. Then we took a walk on the beach. And that concluded our day.

We checked our of our hotel as quickly as possible on Thursday morning. We had breakfast at Pig’n’Pancake which is an Oregon Coast favorite of mine. We visited the Yaquina Head Lighthouse and walked a rock beach at that park where we saw seals lazing around on rocks off shore. Then we  visited the Oregon Coast Aquarium. The highlights of that stop were Owen getting a hug from a sea urchin, seeing sharks, sea otters,  jelly fish and sea horses. We had lunch outside of  the Yaquina Bay Lighthouse before taking a self guided tour. Then we hit the road for the outlet mall in Lincoln City. This was definitely a stop for me, but every member of our family got something while shopping. And they had a fantastic playground. Are you noticing a theme? We made it into our final destination of Tillamook, OR in time to have dinner at the Tillamook Creamery. We came back to the hotel to swim and then returned to the creamery right before it closed for an ice cream dessert.

Friday was our final day of traveling. We went to the Tillamook Creamery for a third time because we love it so much. It was fun to be there with so few people since the crowds hadn’t arrived yet. We took of for Cannon Beach where the boys were finally allowed to get wet in the ocean water. Graham didn’t want to so we walked back to the parking lot and played at a playground.  Owen stayed with Jeremy and played in the water like a happy little fish. As a special treat, we had lunch at Mo’s (yes, again) instead of making our own lunches. We went back down to the beach afterward to fly kites that Grandma had gifted the boys for the trip. The boys loved flying the kites. After the kites were put away we took off to the local bakery for dessert before hitting the road once more. Our final stop on our adventure was to do the Astoria Column. We walked all 164 steps to the top of the column to throw balsa wood airplanes. The column is something we’ve often wondered if we should do with the boys and since Graham would climb to the top of any lighthouses, we figured this would be the next best thing. Owen did have to point out that there was no light at top. Oh well. Flying the planes turned out to be quite the adventure as our planes caught the wind and flew long and far away from the tower. When the boys realized that they would never be able to retrieve their planes they went looking for discard planes around the park and found two to take home.

We arrive home with tons of laundry, sand, dirt and rocks. We had a great time making memories and blazing new trails. I’m grateful that we are at an age with our boys that we can take trips like this. They held their own hiking and kept up with the pace of our sightseeing. They loved every playground and pool we stopped at. Now we’re back to reality, but the good times we just had won’t quickly leave our minds. Owen is now super into redwoods and I have a feeling it won’t be hard for him to twist Jeremy’s arm into going back again some day – especially when the boys are older and able to hike more difficult trails. I might want our next California vacation to be Disneyland, but I have a feeling I might have to battle for that since state parks and big trees seem to hold the hearts of my men.

It’s hard to narrow down which pictures to share in this space. I’m sure I would use up all my media storage if I did the full 1,000. So here is a sampling of 20+!

Making my cover bridge adventure happen. This bridge was a train bridge so the boys were quite fond of it.

I love this picture except for my crazy eyes!

Grove of the Titans 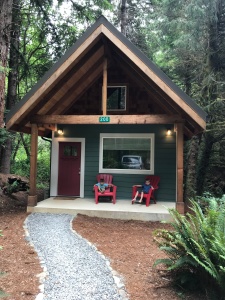 Our cabin for two nights 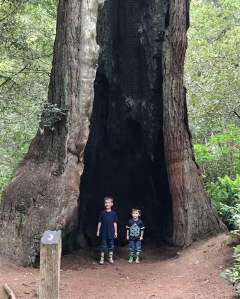 We couldn’t pass up the opportunity to do a drive thru tree! 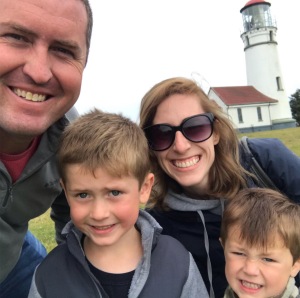 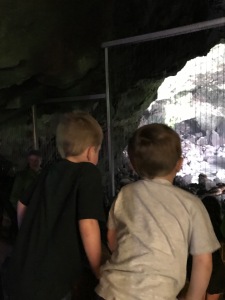 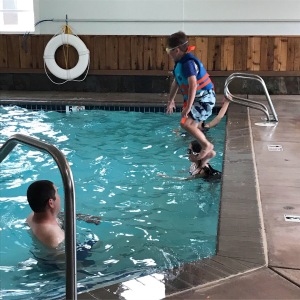 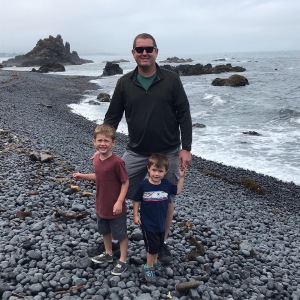 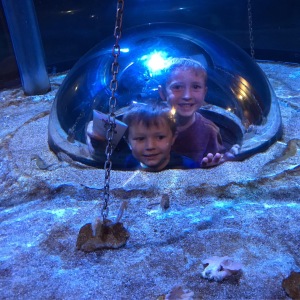 By pool #3 Graham was starting to get comfortable with the water.

Stop #2 at the creamery for dessert

A beautiful day in Cannon Beach 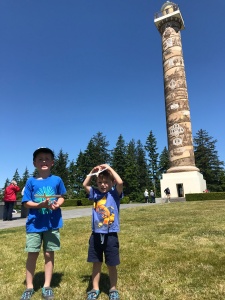 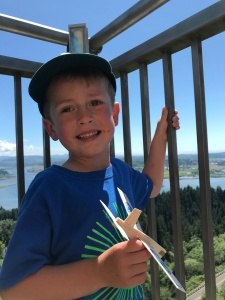 Ready to send his plane soaring!