What a wild week it has been since we last talked!

I wrapped up May with a book party. If someone reaches out to me do a book party then I’m totally game to do one. So I’ve now done two parties in 2019. I’m toying with the idea of actually looking for party bookings in the fall since it’s such a prime selling season. Two parties a month for a few months wouldn’t be too hard to swing. And I should have a bit more free time on my hands once my boys are into a new school routine. We’ll see… I’ve been happily using my Usborne Books & More business to provide gifts for the kiddos in my life. I’ve  had return customers place orders as well. I just cashed in a bunch of personal rewards this last week and I have a big box of books arriving next week that I got for next nothing. Even though I’m not actively pursing my book business, I love that I am still benefiting from it.

Last weekend was very social. We had a birthday party for a friend on Saturday which turned into only half of the family going while the other half stayed home with a bad attitude. I could go into that more…. but it might need to be its own psychology post. Long story short is that Graham is an introvert who didn’t want to go to the party so he threw a fit about getting dressed. A punishment for Owen would be to not let him go to the party, so that is the punishment we gave to Graham. Turns out Graham got his way by staying home and we didn’t realize that was end goal until later in the day. I’ve been pondering the situation all week. It’s going to be interesting to figure out as Graham grows what social endeavors we push him towards and what areas we back off because of his introverted nature. In ministry, we have lots of social situations we show up for, especially as a family. I don’t want him to resent ministry because he needed quiet, down time that his family schedule never allowed for. Like I said, lots of psychology behind that story….

Saturday night, Jeremy and I were able to slip away for a movie date. We got to see Aladdin in theaters. We are enjoying these live action remakes of our favorite Disney movies. We’ve been singing songs from the movie all week. On Sunday, after church and nap time, we had some friends from our growth group over for dinner. It was just the couple and their two boys (who were at the birthday party the day before). Graham was thrilled to have them come over to play. It’s interesting to see how he responded so differently to playing on his home turf with a smaller group of people.

Monday was Owen’s kindergarten screening. I will admit that I was nervous. When we checked in, Owen had some reservation about going off with the teacher by himself. Truthfully, it felt weird to me to send him away with someone I don’t know and off into a part of the school where I wasn’t even sure where he was being taken. His preschool years have all happened at our home church with family members working on site. It’s new to send him off with complete strangers in a building we don’t know. Owen quickly got over his reservation and went willingly with the teacher. When he came back to us, he was skipping and telling us all about the fun he had. As far as I know they had him identify colors and numbers, write his name and cut with scissors along a straight line. They gave us a list of dates for the fall and his school supply list. This will be the first time we’ve gone school supply shopping. I love shopping for school supplies, so I have to temper my excitement. I would run out and buy them all now, but I know that would make me appear weird… So when it is socially acceptable to buy school supplies? Is July too early? Holding out to August might be too hard for my personality!

Since Owen’s screening didn’t run very long, he had plenty of time to head to preschool on Monday morning. This was the first day without his usual friends in attendance. I was so concerned that the change in the classroom dynamic would ruin his last two weeks of preschool. He came home from preschool in a great mood and he has had a fantastic time at preschool all week. This confirms that our decision to let him stay  through the middle of June was the right choice. He’ll go for one more week and then we’ll be officially on summer vacation!

To beat the school’s out rush, we decided to cash in our Great Wolf Lodge gift card that we got from Nana & Papa at Christmas. The boys were so excited to go again after visiting for the first time last September. We got a “wolf den” room where the boys slept in bunk beds with a fun wolf den decor surrounding it. Since our boys are bigger now and they knew what to expect, we spent double the time at the water park this time. Graham was the first to peter out both days, but he went much longer than last time. Graham also tried a water slide for the first time and Owen tried a new water slide as well. There is still one water slide that Owen needs to grow three inches in order to ride. He can’t wait for that day to come. The Great Wolf Lodge is such a fun adventure for our family and we loved every second of it. I love that it feel like we got a mini vacation and all we did was drive 20 minutes down the road!

This next week will be full of celebrations! We have a birthday party for my nephew this weekend. It’s my mom’s birthday is this week and then there is Father’s Day weekend. Quite a few of our friends are already out of school, so we’re scheduling play dates with them around Owen’s school schedule. Monday will also be my last MOPS & MOMSnext meeting of the year. Lots of good stuff coming up, for sure. I’m super tempted to make our third week in June busy as well to keep up the fun pace, but I might need to slow down and pause as we prepare for VBA at the end of the month and then more family gatherings, holidays and vacation in the beginning/middle of July. I have this feeling like our summer is going to go by in a flash. A fun flash, but a flash nonetheless. We are ready for all the fun and sun and adventure that is coming our way! Bring on summer! 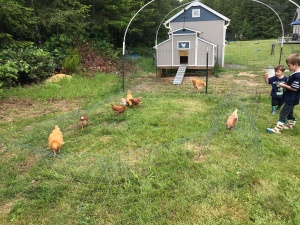 It’s hard to see, but Jeremy built the chickens a tunnel to run through. He is hoping it will help them get more exercise and save some of the grass in their pen. On a side note, we might have three roosters. We for sure have two now. Looks like we’ll have to try again with Buff Orpingtons next year… 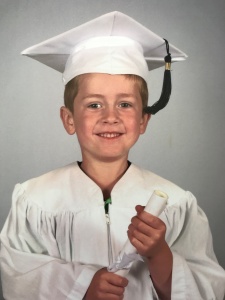 The best one from Owen’s school pictures!

Pizza & orange soda before heading down to swim at The Great Wolf Lodge.

Wolf ears on and ready to swim!

Breakfast buffet. First time introducing our kids to all you can eat dining.

They were so excited to watch the show in the lobby. Last time they could care less about it… it’s interesting to see what can change in a few months.

One of the good/odd things about staying at the Great Wolf Lodge is that I leave my cell phone in the room. I don’t have water protection for it, so I am fully present with my family, which isn’t a bad thing at a water park. It just means I have no actual photos of the main event.

We came home yesterday to a rainy and cold day. The boys asked for footie pajamas and we all lounged around after spending so much energy playing in the water.