After a week solid of fevers and lethargic boys, we were able to rejoin the outside world on Friday. Even then it was a bit iffy on if we should have been out of the house. We were only about 22 hours fever free with Graham. We rested all day in the hope of attending a staff bunco night at the church. Our staff is doing fun activities outside of work to promote relationships and bunco was the first activity scheduled. The boys knew bunco night was coming and were greatly looking forward it. They recently played bunco at GG’s house and had fond memories of the experience. They were set on playing bunco and having pizza at church. It was special and not to be missed. Usually I might have of struggled with heading down to the church on a day off, but since I’d been home almost all week with sick kiddos, I was ready for a change of pace, no matter where we went or what we did. The boys loved the bunco night and Owen won candy for dropping the dice. He took it as a real badge of honor to win that handful of candy. Graham started to pretend sleep at the table while playing so the night out was probably about all his little body could handle.

Due to strategic planning, Saturday was already on the calendar as our home day for the week. The bunco outing was enough of a first step into the real world. It was nice to have Saturday as a slow day. I cleaned the house and did projects. Jeremy rested since he caught the same cold I had the week before. The boys played and we just enjoyed the fact that they were feeling well enough to be off the couch.

The continuing theme of my life is slow and go. I just got off a week of serious down time with sick boys. I got out for three quick outings while the boys were sick. Other than that it was all home, all the time.  Once the great illness was over, it was back on the busy train. Sunday was a full day of church in the morning, nap time/prep time in the afternoon and then growth group in the evening. Growth group nights equal a later bedtime for us. By the time we all settled down, we were spent. Monday was a busier than usual morning. Jeremy had to leave for work early to attend an out of town prayer meeting with the staff. I was on Owen drop off and pick from preschool. After a week of being out of school, drop off was dramatic… I wasn’t surprised since getting him into his class at church on Sunday was equally dramatic. Poor Graham was tired from the night before and still getting his energy back from the illness, so Monday was a bit too much van time for him. He went to preschool drop off and we got gas in the van and then headed home for a half hour until our local pregnancy center opened. Once the center was opened, we loaded up again to deliver 14 boxes of little boy clothes ranging in size from newborn to 2T. Since my mom joined us as a helping hand on our outings, we ran to Safeway quickly for her and then dropped her off at home before turning around and picking up Owen and then heading to a play date across the street at Burger King with a friend. The whole morning Graham kept saying he just wanted to be home snuggling on the couch and I was driving him all over Lewis County. The poor kid sat in my lap through the entire lunch date and didn’t join the other boys in the play place.

I broke my “one thing” a day rule on Monday by scheduling both a play date and a dinner out with a friend on the same day. The play date was a rescheduling from earlier this month when our friends were sick. The month was already filling in and I had to double up. I try to stick to the one thing or one person a day rule so I can give the person of the day my best self. I can give them my best words, thoughts and attention. I find that if I double book my days, by the end of the day my introverted self is spent. Luckily dinner  was low key and my friend didn’t get too much of a zombie Amy. We have a very understanding relationship. We’re both introverts. We get each other and don’t judge when someone is drained from a tiring day or week or month. We understand and sympathize.

This last week I had a friend ask if she could buy some of our baby gear since her granddaughter is moving into the area and she plans on watching her at her house. Jeremy and I talked about it and we felt like it would be good to help this friend out since the gear she was looking for was just sitting in our garage collecting dust. Lots of dust. I took the items in and gave them a good cleaning until I was proud of the condition they were in. We have slowly given away baby items over the last two and a half years. The biggest thing we had a kept storing was the boxes of baby clothes. I’ve been looking for years for the right person to hand them down to since I know what a blessing hand me down clothes can be. The right family has never appeared. While I was giving my friend the baby gear I was explaining my desire to give the baby clothes away but I didn’t know who needed them. She suggested I contact the local pregnancy center and that is exactly what I did. They said they would be happy to receive the clothes. When I delivered them on Monday they were shocked that I had sorted through all them to ensure they were in good condition and they were all in boxes labeled by size. I could tell it meant a lot to them. And that made me feel good. I explained to the boys that we were sharing the clothes we had outgrown so other kids could get to use them too. It’s important to share usable things that we no longer need. I’m trying to raise kids who are generous with their items and don’t hoard a lifetime of things that just sit in a closet. Despite the good lesson and the warm fuzzy feelings of donating to a good cause, I will admit that it was sad for me to part with a good chunk of baby stuff this last week. For some reason it just solidifies that the fact that my boys are out of the baby season. A part of their childhood is done and finished. I’ve been living with these preschoolers day in and out, so I am aware that they aren’t babies, but passing along their stuff made it feel more final, more true. I’m sure as the items move more and more into my distant memory, the sadness will fade. This was bound to happen eventually. I wasn’t about to sit on all those boxes of baby clothes until they were 18 and moving out of the house.

I’m still experimenting with having a home day each week where I don’t go anywhere. Tuesday was the home day for this week. We had the installer of our floors come out to check out some problem areas that have formed. We weren’t sure if that meant the whole floors would be torn up. For all I knew the house was going to be turned into a construction zone. The installer was surprised by our issues and had a couple different options for fixing it. The actual fix date will be set in the future now that he knows what he is working with. Instead of having people tearing apart my house all day, the installer turned out to be a small part of our day so I was able to relax in my space more than I expected. Which was needed since the Sunday/Monday were busy and the rest of the week is a set to be busy too. I would really love to get off the flip flop of nothing going on because we’re stuck at home to extremely busy to make up for the stuck at home time. I wonder when things will balance out. April tends to be one of our busiest months of the year. My hope for finding balance might still be months out.

I’ll leave you on this bright note from my weekly observations. On Sunday Owen was given three plastic coins as an visual aid for his Bible lesson. Since he had three coins, he shared one with Graham who had none. The next day, Graham shared his cookie with Owen (mostly because he didn’t want it). It was sweet to see them each share something with their brother. Moments like that are worth celebrating and I made sure they knew I was proud of them for giving freely with each other. Moments like this keep me sane when they are fighting over the same Lego train for the millionth time.

For St. Patrick’s Day the boys each got a pack of green Legos.

My green contributions to our growth group meal. 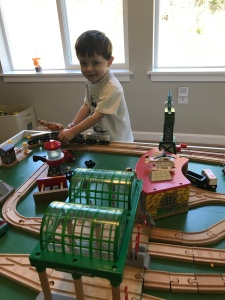 Dinosaurs attacking a train. No big deal in our house.

Owen has discovered the joy of roasting marshmallows.

Helping Dad with the raised beds. 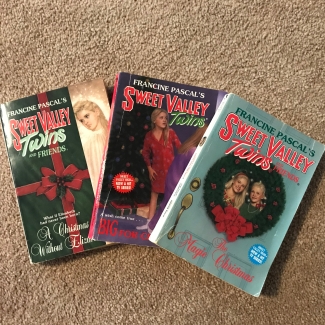 My recent reads: these books have been a box since I moved out of my parent’s house. They came inside with my other childhood books when I got the new bookshelves. I loved the Sweet Valley Twins in middle school. It was fun to re-read something I loved as a kid.