I look forward to January every year. It’s my birthday month and yes, I am a firm believer in birthday month. Birthdays deserve a month long celebration, in my opinion. More than just birthday month, January is the start of a new year and a chance to get back to routine after the holidays. I thrive on routine and I always welcome January as a time to fine tune and get back on track.

This January, however, hasn’t played by the rules. We had one “normal” day where Jeremy went back to work, Owen went back to school, I had time at home alone with Graham and then we had church that evening. Yay January 2nd for being normal. The rest of the week unraveled from there (and I’m being a bit dramatic, because it hasn’t been bad at all, just different).

On January 3rd, I had a dentist appointment to replace the fillings on my bottom right side of my mouth. They were all ancient and one of them had been broken for longer than I can remember – over 5 years, for sure. I’ve had extreme dental anxiety and when the filling broke many moons ago, I stopped eating on that side of my mouth and the problem was “fixed.”  In November, an equally ancient filling broke on the left side of my mouth and now I felt I had to deal with situation.  So I went to the dentist for the first time in over a decade and finally pushed through my fears. The appointment went well and two additional appointments were made. The first to replace my old fillings on the right and the second to replace the fillings on the left. The broken filling on the right side was deep and the dentist was worried the tooth might react poorly and need a root canal. While I survived Thursday mornings fillings, I was sore afterward and worried that my tooth was like a bomb waiting to self-destruct. I think that I am in the clear now, but I am still cautious.  I’m prone to believing that the worst case scenario could happen any moment, so I have no trust with this tooth.  I’m glad that I was able to get over my fear and take care of my health. One of my close friends works at the dental office and was the hygienist who assisted me. She was so comforting and reassuring the entire time. She gave me a big hug when it was all over and then text messaged me the next day to check in and see how I was doing. Moments like that are what make being a part of a community so special. The right side of my mouth was the more challenging side, so when I go back in a couple weeks, I’m hoping it will be easy peasy in comparison.

After the great dental adventure of Thursday, we moved into the out of routine weekend. Jeremy was away Friday/Saturday at an overnight meeting with other children’s pastors. The boys got the opportunity to be bed bugs in my big bed. Graham eventually opted for his own bed, but Owen will never pass up the opportunity to sleep in my room. Saturday night into Sunday was a big wind storm that knocked out our power for over 10 hours. The power went out about midnight and Owen woke up instantly. He can’t sleep alone when the power goes out, so he moved into our room – after watching the storm with Jeremy for quite some time. Overall, I think Jeremy, Owen & I got about 4 hours of sleep before having to start the day. Jeremy got our generator hooked up to save our two fridges and chest freezer. Graham blissfully slept through the whole ordeal and woke up at 7:45am long after Jeremy and Owen took off for church. I stayed home to baby sit the generator and about 9:30am, Jeremy called me saying that Owen was a melty mess and needed to come home. Once the excitement of the morning had worn off, the kid was toast on his 4 hours of sleep.  The nice thing about having my parents as neighbors is they have a fancy generator that runs their whole house. Once Graham woke up, we went next door to a fully lit and heated home. My parents even helped refuel the generator at my house, so I felt very well taken care of.

As you can see, January has a bit wild for us. The rest of the month continues to be out of the norm for the next few weeks, I’ll share more of those details next time I post. My hope for January was to come into the new year with more focus and simplicity. I remember those early baby days when I had to scale back my life to survive. I felt like I was constantly shedding pieces of my old life so I could survive this new life with littles. The to-do lists became more basic, my schedule became more fluid and less full. There were growing pains through that season as I let go of things “I always had done” and started a new journey. Slowly the baby haze has faded and I’ve added more on to my plate. I was hungry to be an functioning adult again, to be productive again. And this served me well while we were building our house. I needed to stay busy and distracted.

In my last post, I talked about scaling back my Usborne Books & More business. I can already feel how taking one thing off my plate has given me more breathing room. Especially in my interactions with Graham. I still have commitments to prepare for and a household to run,  but I can see how slowing down allows me to be more in the moment. I can sit and play without feeling stressed about what I’m “not” right then. I can focus on making the moments more educational and our conversations more purposeful.  Counting, colors, letters are all things we talk about more. And with the start of our chore chart, I’m including both boys more in helping me around the house. Instead of racing to do chores around them, I’m trying to invite them to do the chores with me. They’ve also been given a list of responsibilities just for them.  Owen asked me what the prize was for doing his chores and I explained that everyone in our family has jobs to do and now he has a job too. He gets a roof over his head, clothes on his back and food to eat and we expect that he participates in family jobs. Later down the road, he’ll be able to do additional chores to earn money, but right now we’re starting with the basics.

I’ve had brief glimpses into a more focused and simplified life this month. It’s filled up heart and made me so happy to be present – doing something simple, but with focus, direction, purpose. It seems like a good way to start a new year. I’m optimistic for what the rest of the year holds. 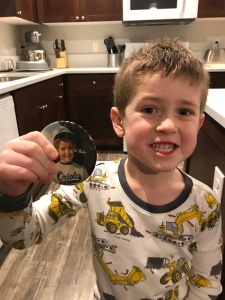 A picture of young Jeremy. Notice the resemblance? 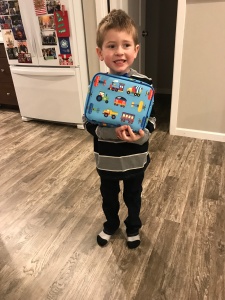 Back to school with his new lunch box from Christmas. 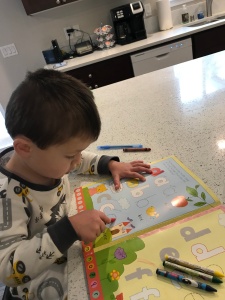 Working on our letters. I used this UBAM sticker book with Owen too. Such a great resource!

Hello Chore Chart – I don’t expect each chore to be done daily, but they are so motivated right now that we are racking up the check marks! 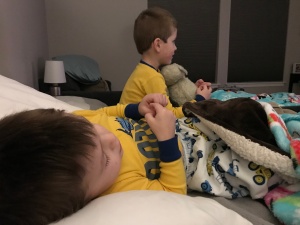 Watching Mighty Pups in my bed while Daddy is out of town.

Hanging at the grandparent’s house while the power is out. 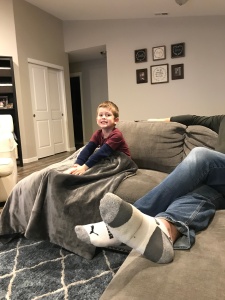 Excited for the power to be back on. Owen took my electric blanket and set himself up with it all by himself. Blanket thief!