This week was full of autumn family fun. The boys were anxious to open their new board games as well as to carve their pumpkins. We ended up doing both in one night! The kids love their new games. Graham especially loves Candyland. Since there is no reading required, he is fully able to understand the game. Owen decided to carve his pumpkin into a train this year. Graham picked Mickey Mouse. And no, the kids didn’t actually carve them. Jeremy did. He is the pumpkin artist in our family.

On Friday night, I left after the boys were asleep in bed to pick up my forever friend, Maggie, from the airport in Portland. I never leave the house after 8:30pm. It felt very odd. This was also my first airport pick up on my own. As much as I would have loved a buddy on the ride down, I really wanted that one-on-one time with Maggie on the car ride home. We haven’t seen each other in person since July 2017 and since she was only in Washington on a short trip for her grandma’s funeral, I was trying to catch whatever time I could with her!

Saturday morning, we met up with friends at the Lattin’s Cider Mill Apple Festival. We usually go to Lattin’s on weekdays throughout the year and that means we mostly have the place to ourselves. The Apple Festival was a bit of a zoo, but they offered extra activities so the kids really enjoyed it despite the crowd. We did the petting zoo, fed the animals and rode on the animal train. It was almost all smiles and sunshine, except Graham got his first yellow jacket sting. I didn’t even see the bee until it was flying off of Graham’s neck. Graham cried out and then was fine. I kept examining it trying to figure out what happen. In the end, we determined it was a sting, but he had no allergic reaction and seemed to not be bothered by it. Praise the Lord!!!

After Maggie’s family time on Saturday, the boys and I picked up from her hotel to get some dinner. We brought her back to our house so she could see it in person. Maggie and I have regular phone dates since she lives in California. She walked through the whole building process with me from a distance. It was really fun to show her the finished product in person. Right before she moved to California, I took her to the “property” to show her the spot where our house would be… so yeah… a lot has happened since she was last here! It was great to sit on the couch and just chat, in the same room, together in person!

We’ve been in a stretch of sunny October weather this last week. It’s perfect for outings in the autumn sunshine. After nap time yesterday, we loaded the boys up and took them to the corn maze. The place we go has two different mazes. We let each boy take turns leading us through. Amazingly, we made it out both times. Jeremy was proud of the boys’ innate sense of direction (just like their father – his words). Then we made a quick trip to Costco (which seems to be our second home lately) and then dinner out together at the beloved Chipotle. According to Owen, Chipotle has the best chips, cheese and chocolate milk ever – the perfect meal combination. To end the fantastic family outing, we got fro yo! Couldn’t ask for a better way to spend an autumn day! 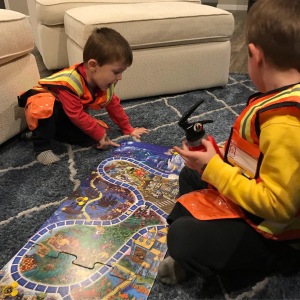 Playing a new family game they got for their birthday 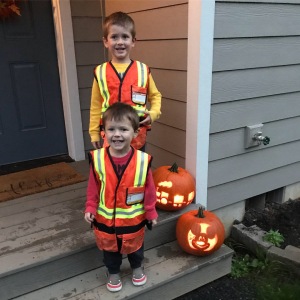 Pumpkin carving with our pumpkins from the patch. Owen decided to do a train and Graham picked Mickey Mouse.

Loving Candyland since Graham can follow the rules and fully understands the game. 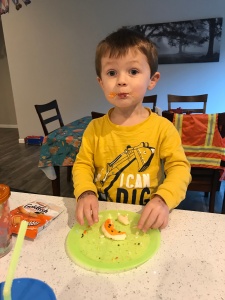 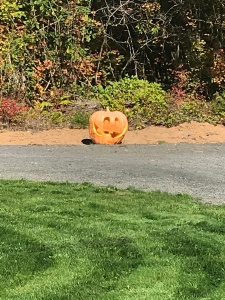 Jeremy carved one of his giant pumpkins. Now it stares into the house from the driveway. Kinda creepy. 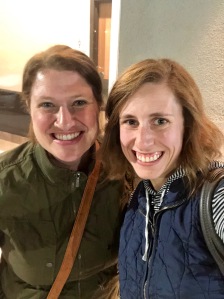 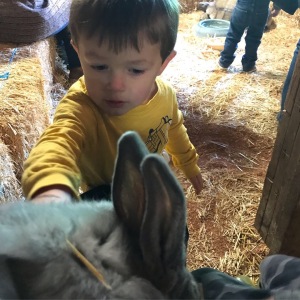 Since we haven’t hung out in person since July 2017, it was a true blessing to sit on the couch and just chat! 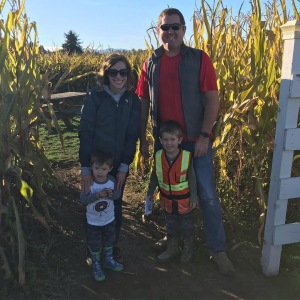 Owen got to lead us through the first maze.

Graham got to lead us through the second time.

Fro Yo after the Corn Maze