Okay. I know that having kids is an adventure. A crazy, wild adventure. In my last post, I shared about Graham getting strep and Owen getting a flu bug and ear infection. We’ve been squirting bubble gum flavored medicine in their mouths on a daily basis. Just because it’s pink and smells sweet, doesn’t mean it tastes good and kids will like it. On Sunday, I looked at Graham and told him he was done with 10 days of torture. No more meds for him. However…. when I changed his diaper on Sunday morning I noticed two spots that looked like his diaper had rubbed the wrong way in his sleep. Poor dude. We got dressed and took off for church. Then as Sunday morning progressed Graham broke out in a rash. We gave him Benadryl since I now keep it in his diaper bag after our walnut reaction this fall. Graham conked out for our annual vision lunch after church (aka business meeting). I was worried about how the kids would do staying late at church, but Graham was amazing… since he was drugged. Again, poor dude. Anyway, long story short, Graham is having a full on allergic reaction again. He is covered in angry, red, itchy spots. He has swollen bumps all over. Yesterday he couldn’t walk on his feet because they were too swollen and hurt too much. We took him the doctor yesterday afternoon and they gave use some additional medicine. He just breaks my heart with how sad he looks. He is really uncomfortable. We know he ate a new food Saturday night. It doesn’t say that walnuts were a part of it, so maybe he has another allergy as well. It’s time to officially get him allergy tested.

I feel like the kids have to keep up with each other. One can’t be more interesting than the other. When Owen got up this morning he couldn’t straighten his leg out fully, so he was limping around saying his leg hurt and he couldn’t walk on it. With some coaxing we were able to get him into the bathtub and that helped loosen things up. He was able to go to school. I asked him how his leg was doing when he got home from school and he told me it still hurts a little. I figure we can do another bath after nap time is over. Owen is also still taking antibiotics for his ear infection… So Graham gets cherry & grape meds multiple times a day and Owen is still plowing through the pink bubble gum ones. I feel like a nurse doing my rounds and keeping track of patient med charts.

All that to say, things are interesting around here. Keeping up with these kids is a bit insane at the moment. I’m starting to develop a “what’s next” mentality. Just as one thing wraps up another thing comes to take it’s place. Never a dull moment.

Other than keeping track of the little patients, we’ve had a big week of working in the yard. By “we” I mean Jeremy, his Uncle Dave, and the boys, even Grandma. Jeremy’s uncle came out last week and spread out the big pile of dirt we had and moved it around the yard. Then Jeremy took his riding lawn mower and spread the dirt out more evenly around the yard. The boys have been busy taking rides with Daddy on the lawn mower. The boys (and Grandma) have been active planting things in the garden. And the boys have gone fishing a few times now that’s in season. Jeremy and Owen took the family on a walk down one of the trails around our house. Owen led the way and was a total trail master. He is so comfortable walking through the woods. Graham asked to be carried most the time which I just viewed as a way to burn more calories on my little nature walk.

We’re still loving the play date/hospitality life! We’ve had cousins up and friends over. I was able to host my MOPS & MOMSnext Steering Team meeting at the house last night. This group of ladies has loved on me and supported through the building process. It was so exciting to welcome them into my home and show them the completed projected since they had heard so much about it. Friendship is a blessing and my heart has been so full as I have been able to open up my home to so many wonderful friends. Again, if you’re a local friend or family member and you haven’t been up to the house, consider yourself invited! I’m a party animal these days. The kids love showing off their toys and if you’re not scared of mud, we have a fantastic backyard to make a mess in! 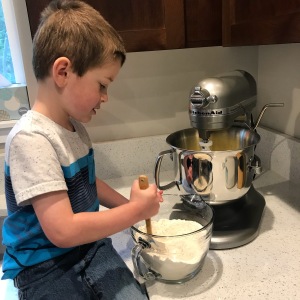 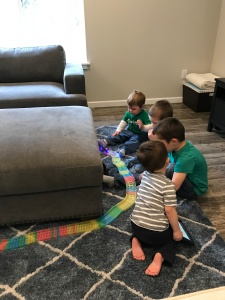 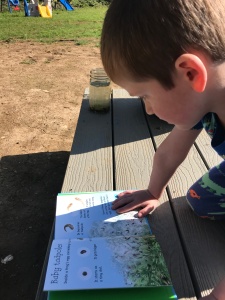 Grandma got a Corgi-gig to put in her raised bed!

Watching Uncle Dave move dirt around the yard and waving each time he drives by!

A trip to the park! 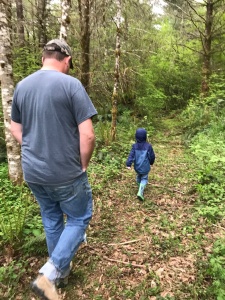 Going for a nature walk around our house

Pausing while the others admire the trees. 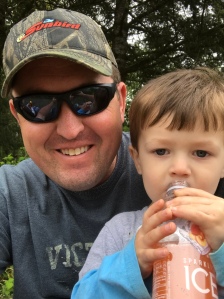 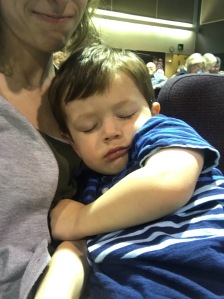 The beginning of the Benadryl haze for Graham

Putting the long driveway to good use on a sunny Sunday.