Yesterday was Graham’s birthday. Our baby is now two years old. Poor kid is called “Baby” by all of us still. That’s going to be a hard habit to break. I’m fairly confident that Owen calls Graham “Baby” like 90% of the time. It doesn’t help that Graham is so little, so it doesn’t seem odd to call him baby. We did measure the boys yesterday on our home growth chart. It seems that Owen has grown about 3 inches in the last year and Graham has grown about 5 inches with most of that growth actually being in the last 6 months. We have well check appointments on Monday, so I’ll be curious to see what the stats are for both boys.

Jeremy took Graham’s birthday off from work so we could spend it together as a family. I really appreciated that. Last year we were up north doing counseling on Graham’s birthday. It was hard for me to not be able to celebrate Graham’s 1st birthday in the way that I envisioned last year. It was also hard to be separated from Owen since he was staying with my parents for the week. This year we got to be all together and that made my heart happy. Graham was such a happy camper and loved the extra attention. Owen was super excited for Graham and kept giving him birthday hugs. It was a sweet and fun time together as a family.

We spent part of the day down in Portland. We went to the mall and got the boys’ some new jeans and their Christmas ornaments for the year. Owen & I discovered that there was going to be a Daniel Tiger ornament at Hallmark, so we had snag that and of course, we added another Thomas ornament to our collection as well. After a little shopping and playing at the mall, we went to PF Chang’s for lunch. We wanted to pick a place that was special and somewhere we don’t get to go very often. Graham loves Chinese food and Owen was super concerned about getting cake wherever we went. PF Chang’s has a dessert called the Great Wall of Chocolate and it definitely met the need of a chocolate cake birthday dessert. We didn’t make it a huge outing in the city. After lunch, we drove home and both boys took car naps. It was nice to do something out of the ordinary and something as a family.

The rest of Graham’s birthday was spent at home. He enjoyed his presents. He got two new books. One is a Busy Book like Owen got for his birthday. Graham is very happy to have his own busy book now. It’s a book with a pull back car that runs along the track on the pages. The kids love them and I love that I got them for free with my Usborne rewards. When it came time to sing Happy Birthday to Graham, he wasn’t quite sure what to do with the candle. Owen has been the candle blower outer in our family, so Graham has really never had a chance to practice. We told Owen he couldn’t blow out Graham’s candle, but when Graham clearly wasn’t going to blow out his candle, we let Owen help him out.

Graham continues to be a mama’s boy. He is difficult to get to stay in the nursery at church. He often wants to be carried by me. It helps that he is small, but he is now two. I’m kind of over lugging him around everywhere. Now that I get one-on-one time with Graham in the mornings while Owen is at preschool, I can see how easy Graham is on his own. He happily plays with toys. Without Owen to fight with our mornings are fairly calm and drama free. It’s really nice. This last week I had coffee with a friend and my mom watched Graham on his own. He wasn’t thrilled with me leaving, but he settled in and my mom commented on how quietly and happily he plays on his own. He is an easy kid in some ways. We haven’t started potty training yet. I want to wait until we move into our own home and have a little more space in the bathroom for a potty chair. Graham is also using more and more words and surprising us with that he knows on a regular basis. Even though he isn’t as verbal as Owen was at this age, Graham keeps making improvements. I’m not too concerned. I’ve heard that younger kiddos tend to be less verbal than their older siblings. Graham loves to be a helper. He helps me bake, he helps me do laundry, he helps me clean. He loves to do crafts and color with Owen. He keeps up with Owen – that seems to be his whole goal in life along with keeping tabs on Mom. And that’s the update on our two year old.

Last week we had family pictures. Graham wasn’t into it. Because he had to be held by me the whole time. He cried often if I tried to set him down. I really had wanted to get some pictures of just me and Jeremy and some of the boys together and separately, but that didn’t happen. Graham wouldn’t allow it. I’m grateful that we got the pictures we did given the circumstances. I’ve included a few of the pictures below for you to enjoy!

Starting the birthday adventures off by playing at the mall.

Lunch with the birthday boy at PF Chang’s China Bistro 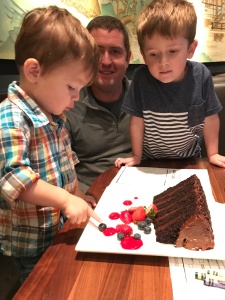 The Great Wall of Chocolate

A busy book for a busy boy 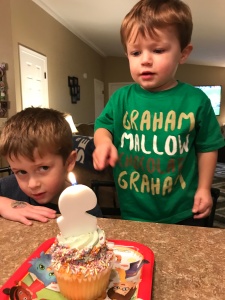 Unsure what to do about the flame 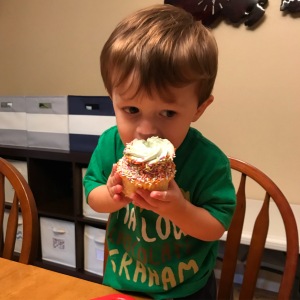 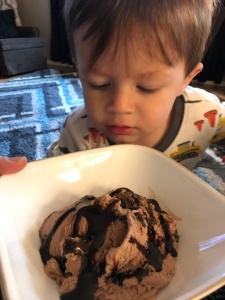 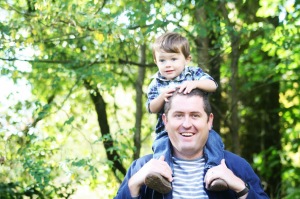 All the drama for this one picture! 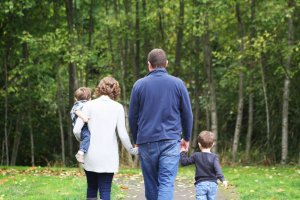 I will go anywhere with these guys!

The beginnings of a floor

Doing the corn maze while the guys work at the property. Auntie and Grandma joined us. Good thing April can read a map! She got us in and out quickly & safely!

A spur of the moment trip to the zoo to enjoy the sunny weather! 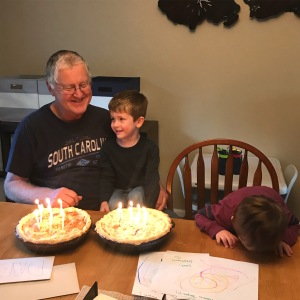 Celebrating Papa’s birthday on Monday. We are blessed with so many October birthdays!