The first day of preschool has come and gone. Milestone achieved. Owen and Graham enjoyed the preschool orientation on Tuesday. Our classrooms have been updated and transformed. They are full of all sorts of awesome toys, books and activity centers.  Both kiddos were sad to leave. We took off to get Jeremy his first pumpkin spice latte of the season and then off to Staples for MOPS supplies. I was holding on to summer until the last moment but it seems Fall moved in on Tuesday. MOPS, pumpkin spice lattes and preschool orientation all point to a new season.

I was nervous about Wednesday morning. I didn’t know what Owen’s mood would be. Would he be excited to go? Would he fight the first day of preschool photo? Well, let me tell you, it was the perfect first day of school get ready morning. We might never be able to achieve such perfection again. Owen willingly got dressed, let me fix his hair and eagerly went out to take his picture by the front door with his backpack. The get ready process and picture took max 20 minutes. Maybe 15. He was good to go. He spent a good portion of the morning skipping around the living room as he waited to leave.  Owen waved good-bye to Graham and I from the van and he was off.

The first day of school went well. Jeremy texted me that he went into the classroom no problem. When they got home, I got the full update about cubbies, snacks, activities, toys. No names of kids in the class though. So who knows if he made friends – he loved the school bus toy.  Jeremy told me that Owen’s class did a tour of the church. My father-in-law mentioned that Owen was at the front of the line for the tour. Since Owen has been attending Bethel longer than his preschool teacher, it seems fitting he should be leading the tour. I’m grateful that Owen’s church classroom and preschool classroom are different rooms. He spends a lot of time at Bethel and I don’t want him to get bored being in the same space all the time. It’s a blessing because he loves going to Bethel and adding preschool just seems to intensify that love.

This morning he did mention he was too tired to go to school today and he didn’t want to get ready. He is often “too tired” to do something these days. It’s his go-to excuse. I think with Wednesday nights being such a late night at church, we will find Thursday mornings to be a bit slower for him. He wasn’t asleep until close to 10pm last so it’s understandable that he is tired this morning. I am too, kid.

Graham took the transition probably the hardest. He has been getting over a tummy bug, so he was clingy yesterday. He didn’t want to play by himself. Today he is doing better at entertaining himself. When Owen came home yesterday, Graham ran for him and gave him a HUGE hug. Owen kind of pushed him away like any big brother would do to an annoying younger brother. Graham was so happy to see him! Then in about 15 minutes of time, the boys proceeded to collide and fight and battle over toys. It seems like in 15 minutes they made up for the 4 hours they were apart. It was crazy! Lunch and nap time followed quickly after that. And then we had church last night so Wednesday will be a day I now see Owen considerably less. It’s not bad, but it does feel weird.

I’m just waiting for things to feel normal. Right now I’m full of jittery energy with MOPS starting next week and Owen starting preschool this week. I’m not used to these things yet even though I am prepared for them. It will take a while for me to develop a since of normal and familiarity with this schedule and my commitments. Until then, I just keep moving forward, planing, preparing, praying. I’m taking each season as it comes and doing my best to make the most of what’s been given to me.

There you go! The official preschool update!

First PSL of the season

Lamby went to preschool too. He stayed in Owen’s backpack. 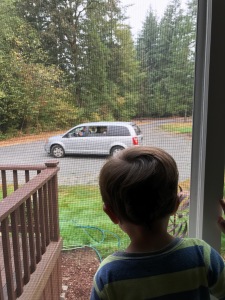 Life according to Owen