It has been so nice to not commute up to Kirkland this weekend. We’ve been able to settle in and makes ourselves at home in our new surroundings.  The boys were all sick over the weekend and that carried into the beginning of the week. Graham and Jeremy didn’t make it to Fall Fest because Graham had a fever and Jeremy had no voice. Owen and I went down to the church Monday morning to help set up. Owen HAD to go in his costume and I was okay with getting some extra use of out it! Owen played with the games as we set up and requested to sample the candy. Monday night, I helped serve nachos and hot dogs at the Fall Fest Cafe as a fundraiser for our MOPS group. Owen attended Fall Fest with Grandpa and then settled in to help Nana & Papa hand out balloons.

Tuesday was a MOPS morning and then the boys and I drove down to Longview to get have lunch with Auntie April. The purpose of the outing was to get a “red cup” with Auntie at Starbucks. My mind was blown to learn that the cups were green this year. Then I learned that holiday cups aren’t arriving until the 10th. I guess we’ll have to schedule another Starbucks date with April to get an official red holiday cup.

Wednesday and Thursday were NORMAL DAYS!!! Praise Jesus! Amen! Hallelujah!!! Everyone took off for work in the morning and I got to stay home with my boys and follow our normal daytime routine. It was exactly what I needed! When Graham took his morning nap, Owen and I read a Bible story together then we did a coloring sheet about the Bible story. On Thursday before our Bible story, I let Owen use his Usborne wipe clean books for the first time. The purpose is to practice tracing letters. Owen wanted to color more than trace, but it’s a baby step towards having intentional learning time during the day. Plus, it was nice to have one on one time with my big boy. Especially after having two weeks of being away from him so much.

Yesterday, we took the boys to Lattin’s Cider Mill & Farm to look at the animals and buy apple fritters. We ran some errands and bought meals to deliver to two of my MOPS friends. One is recovering from surgery and one just had a baby. Our evening concluded with playtime, pumpkin pie and Zootopia. Today I am working on laundry and packing for myself and the boys. Tomorrow, Owen goes back to Grandpa & Grandma’s for a few days and Graham will be joining Jeremy & I at staff retreat. I am seriously hoping that is the last overnight trip I have to take with Graham for a while. From October 18th-November 9th, my days at home have been few and far between. I’m looking forward to getting back from staff retreat and further settling into our groove at Papa & Nana’s house. The boys are doing well with the change and for that I am grateful.

That is the update for now. Hopefully, I’ll have delightful tales from staff retreat to share in my next blog. I’m also hoping to share that our house has officially closed… We are thinking that might happen on the 10th or 11th. If anything, praying the 15th is the latest this process will be drawn out. I won’t be happy if we have to sign yet another extension. I’m trusting God with all the details. I know it will work it out. In the meantime, I am working on growing the gift of patience. 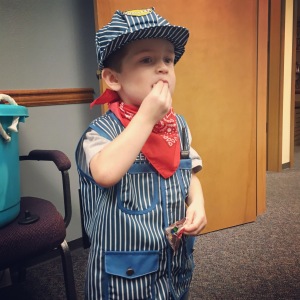 The cutest train engineer ever!

Tigger had a fever so he had to stay home from the Fall Fest fun. At least he had a smile!

Coloring with Mommy while Graham naps.

This is what the house looks like 20 minutes after everyone goes to work. It’s a comforting sight after a busy season away from home.

How tall this fall? In Graham’s case, it should say how short!  Tiny toddler!