Filed under: Family Time,Parenthood,Simply Me — Amy Scott @ 8:00 am

Thursday started off like any other day. I was tired. Owen was whiny. Graham was Graham… Around nap time, Owen started acting funny. He was just laying around. At one point he was just starting at the TV with the “Are you still watching?” screen on. No show, just a blank screen and a blank stare from Owen. I took his temperature and he had a low grade fever. He was starting to breathe a bit weird (he had made the same sounds the night before and I thought sleep would help). His nap didn’t last long and he ended up in bed with me. His fever had gotten to 102 and he was consistently breathing strange – short breaths that seemed uncomfortable. Since he didn’t have any cold/flu symptoms, I started thinking of things like appendicitis or meningitis… He told me his tummy and back hurt, but that he didn’t feel like throwing up. I gave him some Tylenol and moved him to the couch where he laid like a blob for the rest of the afternoon.

I had talked with a Jeremy a few times throughout the afternoon and expressed my concern that was acting strange. When Jeremy got home, he thought Owen’s breathing was weird enough that we needed to go to the doctor. Our doctor’s office has an after hours walk-in clinic. We were quickly taken back to a room. The doctor had him take a breathing treatment which Owen hated. He screamed and cried through most of it. The breathing treatment didn’t change anything so the doctor sent us over to the hospital for a chest x-ray. She wanted to make sure that Owen didn’t have pneumonia.

When we had originally taken off for the doctor’s, we had no clue that our night would land us in the hospital. The whole ordeal took a lot longer than we had expected. I had left Graham with my parents thinking that we would be back soon. The poor kid (and my poor parents) had more time together than we had planned. Nothing like having a tired baby at bedtime without his mom for a good time.

We got back to the doctor’s office right before the clinic closed with the results of the chest x-ray for the doctor to look at. Owen was still breathing weird at this point, but the x-ray showed that his chest was clear. It was a total mystery. The doctor told us to keep an eye on Owen and be back for a follow-up the next morning. We went to get Graham and took home two tired boys. Jeremy got up and checked on Owen a couple times in the night to make sure he was breathing okay. By the time Owen got up on Friday, he was occasionally breathing weird, but for the most part he was breathing normally and he had no fever. By the time we got the doctor’s office, he was a totally different kid than the 12 hours before.

The doctor gave us the all clear. Owen was fine. Random and unexplainable. Our Thursday night plans had been to go to the fair before the mystery illness hit. We decided to go to the fair after our doctor’s appointment since the doctor had given us the green light. It was a hot day so our time at the fair was brief. We also didn’t want to push Owen too much. Owen found every train at the fair. We even stopped to look at the model trains twice. Kids got a free ride ticket with their entrance so Jeremy used Graham’s ticket to go on a train ride with Owen. It was Graham’s nap time so he slept through most of his first  fair experience. I was a bit disappointed that Owen wasn’t more interested in the animals. The heat was really slowing him down…(and all he wanted to do was look for trains). We got Owen a hand squeezed lemonade (he is really into lemonade right now). Jeremy and I got hand dipped corn dogs and split an elephant ear. For me, the fair is all about the food. I had been excited about going to the fair this year, but with the heat and the mystery illness, it turned into a quick and hot experience. I’m still glad we did it. Owen loved the trains, I loved the food, Graham got a nap… Not too bad over all.

I know that life is never dull, but wow. Thursday turned out way more dramatic than I could have ever imagined. I’m glad my big boy is doing good now and back to his normal self. Sick kids are heartbreaking. I’m grateful today for my healthy, happy boys! 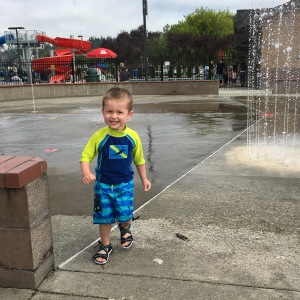 Being silly at the doctor’s office

Walking into the hospital

Checked into the ER 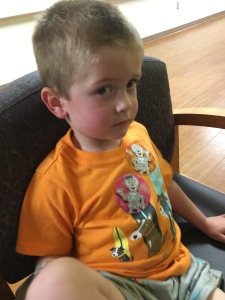 Waiting for the x-ray results with his cool stickers!

Owen and his love of trains at the SWW Fair