The last week has been a busy one for the Scott household. Lots of going here and there. Last Saturday, our little family got out into the sunshine and visited Lattin’s Cider Mill. Owen enjoyed feeding the goats and looking at the chickens. It was nice to do a low key family outing. The doughnuts they sell at the cider mill make it a kid friendly and a parent friendly location. Sunday our family stayed after church for a Growth Group. It was nice to sit and chat with another young family. 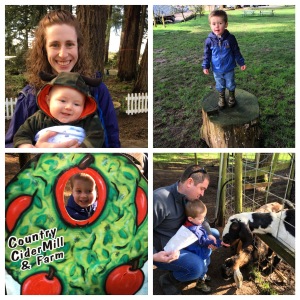 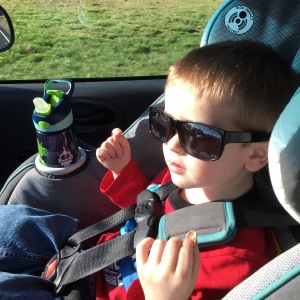 Riding home from church in Daddy’s truck. A cool dude and his penny.

Monday was the first wedding we’ve attended since Owen was born. We haven’t been big on the wedding scene since becoming parents. Nothing like making the first wedding we attend to be one in Seattle on a Monday night with both kids. I had lots of doubts. I envisioned our kids being a mess and ending up in the lobby. However, they did great. Owen laughed loudly at the inside jokes and exclaimed his love of cheddar bunnies during communion. Graham wasn’t able to hold out long enough for us to stay for the reception, but it was nice to be there for the ceremony. My cousin, Jessica, was a beautiful bride and the hotel that she and her husband, Brandon, got married at was lovely. The room was amazing. 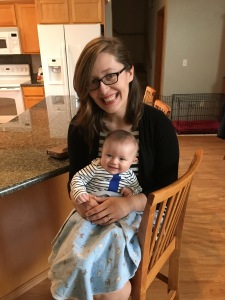 I got the joy of riding in the backseat of the minivan between two car seats!

The beautiful ceiling at Jessica’s wedding!

Tuesday was Graham’s 4 month well check. He is weighing in at 14lbs 13 oz (31%), 24.5in (17%), and head 42.3cm (65%). He took his shots well, but still ended up getting a low grade fever the next day. Poor kid. Overall, it wasn’t too dramatic. Despite being tired from the late night on Monday, we plowed through the day and ended it was a business meeting for our network area of AG pastors. I’m not a huge fan of voting meetings, but it was nice to be kid-free for a few hours. My in-laws live right down the street from the church where the meeting was held. They bravely watched Graham post shots. So thankful for brave and kind family members that support us.

Thursday, we had a fun play date with Auntie Beckie and cousins, Nolan & Bennett. Two two-year-old boys are a hoot on play dates. There are ups and downs, but mostly Owen and Nolan are good buds. We took a lovely walk in the sunshine and the boys threw rocks into puddles. It was a very slow walk, but that didn’t matter because we were out in the sun!

Toddler life! Rocks and puddles on a sunny day!

Friday can be summed up in one sentence – Binge watching Fuller House. Yes, I did. And by I, I mean we. Jeremy was right along side me. I wasn’t feeling the greatest, so Jeremy encouraged me to rest. He is a sweetheart. Always looking out for me.

Awkward childhood photos… The toddler wanted to hold the baby.

Today, we had family pictures as a fundraiser for my MOPS group. I had set the time for mid-morning thinking that it would be a good time between wake-up and nap time. However, I had to wake up Graham from his morning nap and Owen had to get woken up after 10am. Owen doesn’t enjoy being woken up, so of course, he cried the entire time we got him ready and part of the car ride to the church. Once we got out of the van, he perked up and grabbed some pea gravel from the playground. I haven’t seen the official photo yet, but I think it turned out okay. We are all looking in the same direction and no one is screaming, so that is a win, right? 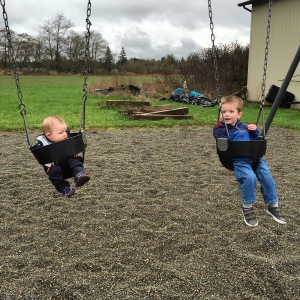 Enjoying the swings after family pictures!

This next week looks like it’s going to be another big one, full of activity. I’ll fill you in as it unfolds. It’s a big week for children’s ministry. We have a special teacher training tomorrow and a big dinner on Tuesday as we cast the vision for what children’s ministry at Bethel Church looks like in the near future. We are hoping to start a big remodel project soon. It’s very exciting times at Bethel! Okay, I’ll share more about that later! Lots to do. Lots to look forward to.