Happy New Year!!! 2015 was not my favorite year… It was pretty rough. I had a very uncomfortable pregnancy. I am happy to no longer be pregnant. Graham has been an unhappy kiddo for most of his small life. The transition to two kids started out well, but got complicated in a hurry. Owen held up for a good while before deciding to join in the crazy.  Thus making 2015 pretty insane from start to finish. It wasn’t a bad year, but I can’t say it’s a year I would like to repeat. I am thankful as a I reflect on 2015 because it is filled with family memories and a lot of love. I am blessed to be surrounded by family and friends who love me and keep me going. Despite the drama, I know that I am not alone and I am loved. 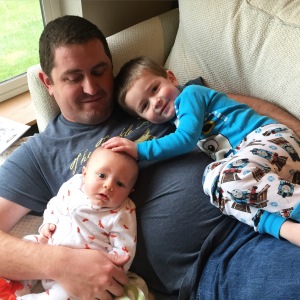 I loved having Jeremy home for almost two weeks of vacation! The expressions in this picture are great!

2015 ended with Owen getting the stomach flu. I had a play date with my friend, Kaly and her boys. Graham has been on his new stomach meds and drops for a week now. I am happy to report that I am seeing improvement in him. He is less fussy and has been crying less. I’m fairly certain that his tummy is feeling happier. Now he is acting much more like a normal baby. He fusses when he is tried or gassy, but that is about it. I am thrilled! I really hope we are on the road to a healthy, happy baby.

New Year’s Eve is my sister’s birthday. Her husband, Andrew, is one day older than her. We spent New Year’s Eve celebrating both birthdays. Since I can have soy again, we were able to go out to Chinese food at one of our favorite local places. YUM!!! Jeremy and I started a movie once the birthday celebration ended. We made it to 10:30pm and then decided to call it a night. I know, we sure know how to ring in the New Year!

28 candles for both Andrew and April

For New Year’s Day, we took off to Portland to explore the Oregon Zoo. It was super cold. With the wind chill it felt like 18 degrees. We enjoyed the quiet zoo. Some of the animals weren’t out because of the cold. We stayed long enough to see all the Zoolights come on and then left before the big crowds showed up.

First shared bath for the boys! Gotta warm up after the cold zoo outing!

January 2nd was our 4th round of Christmas! This time we celebrated with my immediate family. Owen and Graham got a train table from Grandpa and Grandma. Owen has been in train mode ever since. He is obsessed and occupied. It’s fun to see him so focused as he plays with his trains. The train table definitely fit the train theme of this Christmas. We are swimming in Thomas items and trains. Owen is super blessed. Even though we celebrated Christmas in 2016, it was a great day and one worth waiting for. 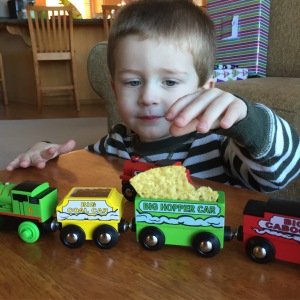 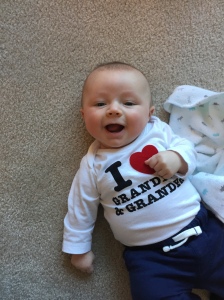 Chilling after the big celebration

I had three goals for the end of 2015 and I am happy to say that I accomplished them! Are you ready for this? I went to see Mockingjay Part 2. I visited the new Home Goods in Olympia and the new Hobby Lobby in Lacey. Yes, those were the three things I wanted to do before the end of the year. I made it to Hobby Lobby on December 28th, so that goal almost didn’t happen. Now that I look forward to what 2016 holds I can’t say that I have any super specific goals. I told Jeremy that I want to be an intentional parent. As I look at 2016, I want it to be a year where I continue to grow in my mothering. Especially now that Owen is at an age that requires a lot of discipline and guidance, I want to raise adults who will be functioning members of society. I want to model for them what it means to love Jesus and to serve others. I want to be intentional and keep trying to do the best for them. A slightly more specific goal might be getting out of my maternity pants… That one might not happen quickly. I’m loving no zippers, no buttons and not worrying about a muffin top. How is that for some honesty? 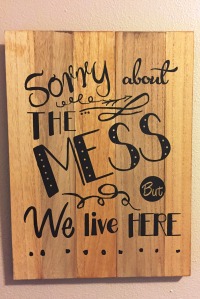 My find at Hobby Lobby! Sums up life with a toddler!

I’m not sure what 2016 holds, but I ready to face it with my handsome hubby and crazy wonderful boys! I am so blessed to do life with these three fantastic guys. I’m sure there will be many adventures with family and friends. I’m ready to make some memories that will last a lifetime. No matter what 2016 has in store, I will go forward knowing that God is for me and he is good. The best is yet to come. I fully believe that. I plan on blogging about it all! Stay tuned! 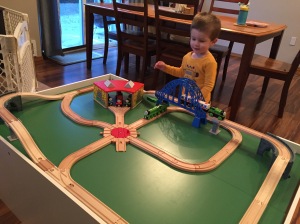 Playing with his new train table! 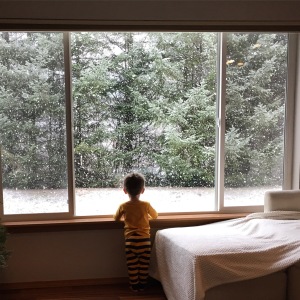 Yelling “SNOWFLAKES” as he stares out the window!

Morning with my boys! Owen dancing to the ABC song and Graham smiling at Mama!