My last blog was mostly about Graham so this one will be mostly about Owen. However, I will give a quick update on the last week. Jeremy gave me a head cold. This meant that I had a 102 degree fever while Graham had a 101 degree (thanks to his shots on Monday). I felt like death… And I was responsible for two children! It was grand. Okay. Not so much. I survived though! I’m doing a ton better now, but poor Graham is still fighting off the fever. Poor little guy. The stats from Graham’s appointments were not surprising! Graham weighed in at 12lbs. 2oz. (43%) and his height is 22in. (9%). He is growing in width faster than height. He is short and tubby! His head is at the 55% which is pretty average. No giant noggin like his brother. We did take a diaper to be tested and it came back positive for blood in his stool. I’m not surprised, but it’s still sad. I’m anxiously waiting for our appointment with the specialist next Monday. I am ready for answers.

Now back to Owen! It can be easy to lose track of the toddler while taking care of a fussy baby. However, Owen is making his presence more and more known. He has handled life with Graham fairly well, but in the last week or so that has started to change. He is super needy and I hear the words “Mama up” every 5 seconds. I am happy to be so loved, but there are times where it’s hard to balance it all. He has also thrown some epic temper tantrums. Oh my. The drama! The expression “save the drama for your mama” is not funny to me. Don’t give Mama drama! She doesn’t want or need it!

Okay, now for the good stuff! Owen is extremely talkative these days. He is a little parrot that says almost everything back to you. We’ve been practicing saying all the family members names. It’s cute because he can say almost all of them really well. He seems to struggle the most with Andrea and Grandpa. He can say Grandma just fine, but he wants to call both grandpas “Papa”. He is obsessed with Papa. He calls the church “Papa’s house”. One day every time a car drove by he yelled “Papa’s home”. The next exciting development in practicing names is Owen can now say his own name. He doesn’t say it a lot, but he told the cashier at Michael’s “I Owen”. The other day when I was taking my temperature, he kept saying “Owen” and pointing at himself so I would take his temp too. The other day he kept telling Jeremy “Owen’s seat” because he wanted Jeremy to load his car seat into the truck so they could go for a drive. He can also say please and thank you and a few times I have heard him say sorry (always to his brother). He likes to tell us that baby is crying or baby is sleeping.

It wouldn’t be a blog focused on Owen if I didn’t mention he is obsessed with Thomas and Friends right. Massively! We got him a pair of Thomas jammies and we have had a hard time getting them off of him. We actually got a second pair of jammies so he can wear a clean pair while we wash the dirty pair. It seemed like the best option or he would be a stinky kid wearing the same clothes until they fell off his body. It’s going to be a very Thomas Christmas for Owen. Most of the gifts from us involve Thomas. He can say the different train names and dances to the music on the show. The love of Thomas is deep. Deep.

Owen loves to run especially in circles. It makes me laugh really hard. I love to see him burn energy! He still has a hard time going into the nursery at church, but he calms down quickly once he gets in and starts playing (current favorite toy is the train). There is a window between the two nursery rooms and Owen will go to the window and say “up”. He loves the workers from the baby side of the nursery and they love him too. I have gone into the nursery more than a few times to discover that Owen is on the other side hanging with his favorite ladies. I don’t care where he ends up as along as he with responsible adults and happy.

Oh and potty training… It’s a slow endeavor. We’ve had 5 successful events in the potty. He loves wearing his Thomas pull-ups. I wish he was more focused on potty training, but at the same time, with Graham being super needy, I’m not sure that I have the energy to be on top of potty training right now. I’m fine with this being a slow process. I know that at some point it will stick… Or at some point, I’ll have more energy and be able to give it more attention. I wasn’t planning on starting the potty training process until spring, so I’ll just view it as we are head of schedule. Any progress right now is a bonus!

Tomorrow morning we plan on doing Christmas presents from us to Owen. I am excited for this Christmas since I think Owen will be more excited about the gifts than the wrapping paper. Last years was all about the bows on the presents. This year I wanted to make sure that Owen knew about the true meaning of Christmas so we’ve been reading the Christmas story at bed time. He says “Baby Jesus” in the cutest way.  He really likes that there is a cat that sits by the manger.  It’s sweet to see him interested in the story even though I have no idea if he gets that it’s about Christmas. We don’t talk about Santa a lot, but he has seen a few programs with Santa in them. He’ll say “ho ho” when he hears “ho ho ho”. I’m sure Christmas will only get more fun as Owen gets older. I had a blast shopping for him this year. Shopping for kids of my favorite thing! I am so excited that our Christmas celebrations are about to get underway tomorrow!

Next post will be full of holiday cheer – hopefully! I can’t wait to share our Christmas adventures with you!

Taking a selfie to let Dad know that Owen is wearing the Thomas jammies yet again! 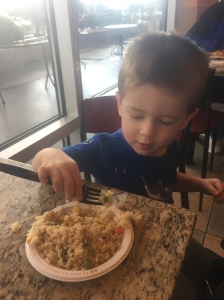 Owen can fit through the bars at Cabelas. He wants to be as close to the water as possible. 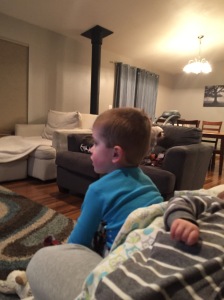 Sitting on my lap while I nurse Graham! Owen takes needing to be with Mom to a new level! 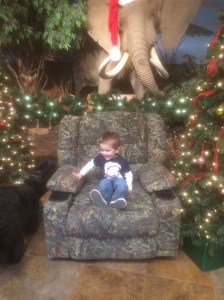 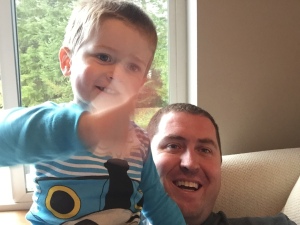 Taking pictures with Daddy on the iPad!