Life is so crazy! The last week and a half turned out totally different than I ever expected! I was feeling good about having an induction date set. I made my to-do lists and enjoyed the idea of having a plan. We were ready for baby to come! Then the week of contractions hit and after multiple visits to the hospital, I wondered if our little guy would make it to the induction date. As it turns out, Graham William Scott wanted to come into the world on the 19th, not the 20th.

On Sunday, my contractions were becoming painful and stayed about 10 minutes apart for most of the day. As the day came to a close, my contractions started to get closer together. Jeremy asked if we could go to bed and I said I wanted to stay up a little longer and count. When we went to bed that night the contractions were about 7 minutes apart. After an hour and a half of sleep for Jeremy, I woke him up saying that I thought we needed to go to the hospital. This was probably our “worst” case scenario. I hadn’t been sleeping great all week thanks to the contractions and Jeremy wasn’t thrilled about being up all day knowing that he was going to be up all night, but babies come when they want. We did the stereotypical drive to the hospital in the middle of the night. Thankfully, Jeremy’s parents were able to come to our house and stay with Owen while we were gone. 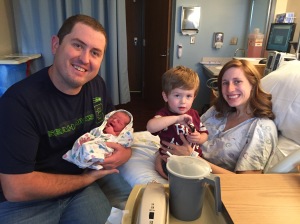 Our little family of four!

Once we arrived at the hospital, I braced myself for the news that things were progressing slowly. It had been the theme of my week and the whole labor process up until that point. However, the nurse delighted us with the news that we were already 5 cm dilated. This birth process was so different than with Owen. Going into labor naturally made things go much smoother, even though I still opted to have an epidural. After a week of wondering when our little guy would arrive, things moved quickly all on their own. At 8:57am, Graham William Scott officially joined our family.

Graham has been a totally different kid from Owen right from the start. It’s been fun to compare our experiences. I’m having a hard time telling “who” Graham looks like, but overall, I see a lot of Owen in his facial expressions. Owen was slow to figure out the whole eating process, but Graham has taken to eating right away. We always had to wake Owen up to eat, but Graham likes to eat every two hours. Graham also loves to be held and it’s been harder to get him to sleep in the bassinet. The weirdest thing is how Owen looks so much older to me now that we have a baby in the house. I know that Owen is a big boy, but having someone little around makes me realize just how quickly Owen has grown up. 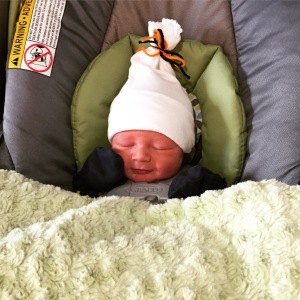 Owen seems to genuinely like his brother. At the hospital, Owen was fairly indifferent to Graham. Now that we are home, he is excited to see his brother and he keeps tabs on where Graham is at. He loves to give Graham kisses on the top of his head. He also enjoys petting Graham’s hair and fiddling with his fingers and toes. With Jeremy at home, the transition from three to four has gone better than I expected. I figure things might get more complicated once Jeremy is back at work and I am outnumbered. Right now, apart from the lack of sleep, all is well in our little world. We are enjoying these days as our family finds our new flow.

I am so grateful for Jeremy through all of this. Once my contractions started last week, he has literally been by my side the whole time. He wasn’t going to let me go through any of this alone. He has been a huge support to me when I haven’t felt good and he has kept up with Owen when I couldn’t. He is involved, helpful and encouraging. Now that we are home, he continues to serve me and our family with a smile. We are both tired, but we are in this together. We are a team! I am beyond blessed to do life alongside this man! I love him and I love our little men. I am surrounded by the most amazing guys a girl could ask for! 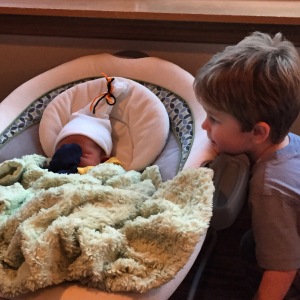 One Response to “Welcome Graham William”