I debated if I should post this blog… I try to keep some stories in my life personal and private. But after the week that I’ve been having I decided that I need to relieve some tension and blogging just happens to be one of my best stress relievers. Jeremy joked that I should write a blog called “Best Laid Plans”. We have an induction date set. I had my to do list all detailed out for our last week as a family of three. I was looking forward to some down time with my family. I especially wanted to make my last few days with Owen as a only child count and really savor them. Then Monday night happened. I started having contractions throughout the night and I ended up getting about 2 hours of sleep because I was never sure if it was over or if I should wake up Jeremy and tell him it’s time to go to the hospital. The contractions were irregular so I held off and eventually things calmed down. Tuesday, I was having a couple contractions every hour, but that seemed normal to me. I’ve been having random contractions for weeks now and I just figured it might be “after shocks” from the crazy night before. Then we reached Wednesday… I started to contract regularly. Once we reached 7 minutes part, we went to the hospital to get checked at the request of my doctor’s office. I really thought this was “it”. After a day of regular contracting, I thought for sure we were heading in for the grand adventure of labor. Until I realized that unless I was dilated to four cm, they wouldn’t keep me. I was at a one, so home I went. Thursday, the contracts got closer together, but still I knew that I wasn’t in active labor. The contractions weren’t productive enough. They seemed too mild. I tried getting out and about, I tried walking, I tried relaxing. Nothing seemed to make them any stronger. Today, the contractions have gotten even closer together and started to feel more productive. At the urging of the doctor’s office, I went back to the hospital and got checked this evening. Still not dilating, but I’m more effaced than before. I guess something has been happening, but not enough to stay. So here I am, back at home. Contracting and waiting. The hardest part of all of this is the mental struggle. Keeping track of contractions and wondering if you should go to the hospital is not a fun game to play. Plus, I think my body is just getting tired of contracting. Ideally, I wish that things would either ramp up or just stop completely. I know that I have an end date in sight with the 20th being my induction. I really would like to not contract regularly up until that point. The contractions are getting more uncomfortable and I have no idea if I am excited about that or not. Part of me thinks they aren’t doing anything and another part of me hopes that I’ll have a baby before the 20th. Today especially, I have told myself to not expect anything. If you would have asked me on Wednesday night, I would have thought for sure we would have a baby by now. However, after three days of consistent contracting, I will assume nothing. In fact, I didn’t think we would be staying when we went to the hospital tonight. No more hoping, wishing, guessing or assuming. I think that I might take a break from the contraction counting. I know that they are close together, but I am learning that quality is more important than quantity. The amount of contractions doesn’t matter as much as a the strength of them. At this point, I will probably wait until my water breaks, or if I can’t talk through the contractions, or I feel like screaming for an epidural before I head back to the hospital. I have not reached that point and I might not. Thank God for Tuesday being a set induction. I know this end at some point. Maybe sooner, maybe later. Only time will tell. 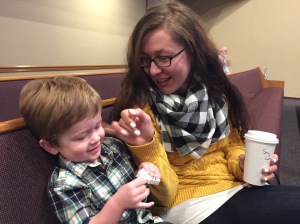 Owen hanging with Auntie at church. Probably our last Sunday for a few weeks.

Lamby made it to church too… I was grateful that I was able to get Owen into the nursery without Lamby by his side. It took some distracting! 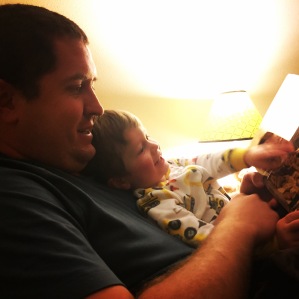 Staring down a woolly worm

Our room tonight was HUGE! We were kind of disappointed that we didn’t get to keep it… Gotta love space! 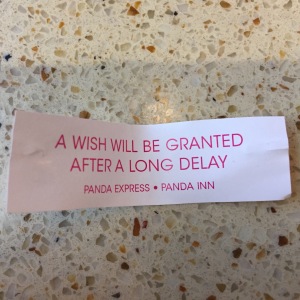 The funniest fortune possible after the week I’ve been having