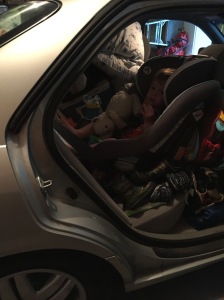 Loaded and ready to go! We packed the car to the brim, but Owen didn’t seem to mind.

Early Wednesday morning, we set off an adventure. Our destination was Crater Lake National Park. Jeremy and I had been planning a camping trip for this summer and up until a few days before we left, we assumed that we would go to our “usual” spots. Jeremy started to do a little research and got all excited about the possibility of going to Crater Lake. He had never been there and I remember it being a fun stop in my childhood. I was game to change the plan and explore a new campground. On the way down, we realized that was the farthest away from home both Owen and Toby have ever been. They handled the car time like champs and I was grateful. 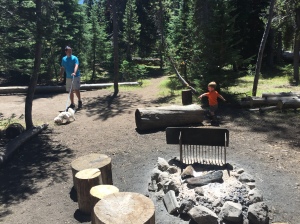 There are so many details about this trip that I would love to share with you! I don’t want this to be a lengthy blog, so I will do my best to pare down the moments. First off, Owen loved looking at the lake. He kept calling it “ba boat”. There were a few boats in the water, but it didn’t matter if a boat was in sight or not, the lake was called “ba boat”. Owen loved the camping experience. He was a dirt ball the whole time and it was quite humorous. I knew he was going to be a mess, so I didn’t even let it phase me. Setting up the tent was a hot experience and not one that I enjoyed. Owen loved it when I inflated the air mattresses. He loved hanging in the tent. This was our first time using this tent even though we bought it last summer. It had plenty of space for the twin and queen air mattresses we brought and it had plenty of room for another family member in the future. We made a smart move when we got this tent. 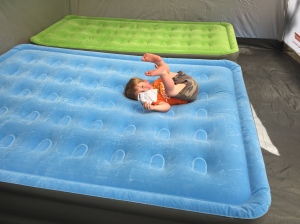 Loving the tent and air mattresses

One of the best parts of camping is the food. Owen enjoyed watching Jeremy make Jiffy Pop on the camp stove. He also loved the special treats we packed like Doritos, chocolate pudding cups, veggie straws and mini-donuts. I had a chance to make my favorite campfire pizza pockets and s’mores.

I was a little concerned about how Owen and Toby would do out camping together. Toby can be a cranky dog and I try to keep distance between the two. Toby did great with Owen. Toby hates camping and turned into a pathetic pile of a dog while we were out in the woods. He didn’t seem to have any interest into doing anything but looking sad. While I felt for him, I was glad to see that it made him very docile. 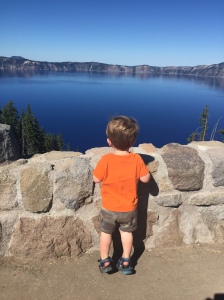 The real adventure came at bedtime. When we first got into the tent, I noticed that queen air mattress had deflated quite a bit over the afternoon. We added more air to it and then started a game of musical sleeping bags. Ideally, Jeremy and I would have slept on the queen together and Owen would have slept on the twin. This will be a goal for future trips as Owen gets older. The final arrangement ended up being Owen, Toby and I all on the queen air mattress with Jeremy on the twin. Getting Owen to sleep took some time, but around 11:00pm the tent was finally down for the night. Or so I thought… I woke up around 1:00am and realized that I was laying on the ground. Our air mattress was leaking air somewhere. I told Jeremy, who was also awake. Owen was sleeping through it all so I thought I would hold out. However, I couldn’t fall back asleep. Being pregnant and all, I get up and use the restroom a couple times a night. I was really trying not to do that while out camping, but after a couple hours of being awake in the middle of the night, I decided I had to go. This meant it was a family outing since Owen woke up when I tried to get up. Toby and Jeremy went and used the men’s room and Owen and I went into the ladies room… at 3:00am. Good times. We added more air to the mattress and got Owen settled back down. I think I was asleep sometime after 4:00am and woke up on the ground again around 6:00am. That put me at a grand total of 4ish hours of sleep… with my toddler plastered to me all night, sleeping on the ground and 27 weeks pregnant. Not the best sleep I’ve ever had. I was sore and tired the next morning. 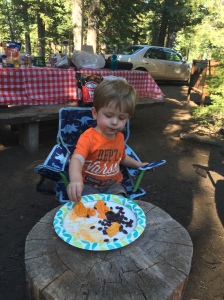 Since the air mattress turned into such a giant pickle, we decided to pack up camp on Thursday morning. I was bummed, but I didn’t want to do another repeat night of sleeping on the ground. Owen slept so much better than I expected out camping. He didn’t mind at all that the air mattress deflated. Probably because he was sleeping more on me than the mattress itself. Hopefully next time will go better and we’ll be able to give him two nights out in nature.

Our plan for the day already included in a drive around the lake to the various lookout spots. After we got packed up, we did our drive and then left the park. It was a HOT day and we were amazed at the temperatures our car thermometer were showing. Since it was a 6 hour drive home, we had to make a couple stops for Owen and Toby to stretch their legs. However, the heat made these stops quick. Also, we couldn’t do anything indoors since we had the dog to think about. There was no way we could leave him in the car. Once we got just outside of Portland, we decided to skip the rush hour traffic and find a park to relax in for a while. We got some dinner, ate outside in the shade and then played in the spray park. Owen enjoyed the time out of the car and splashed away while we waited for traffic to clear. It was a nice way to break up the time in the car. Also, I think the water at the spray park did a good job of getting the layer of dirt off of Owen that he had developed while camping.

Overall, it was a good trip full of fun family memories. Even though we left early, we packed two days with tons of activity. I slept so hard Thursday night once we got home. It felt so good to sleep in my own bed. Friday, we went to breakfast together as a family and then went and returned our faulty air mattress since it was a brand new and recent purchase. Despite being home a day early, we still enjoyed our family time together, so it really felt like Friday was still an extension of our camping adventures. And that my friends is Owen’s first camping trip in a nutshell. 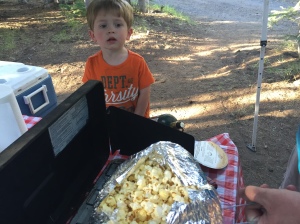 Owen loves popcorn so Jiffy Pop was a fun treat! 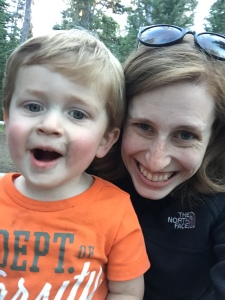 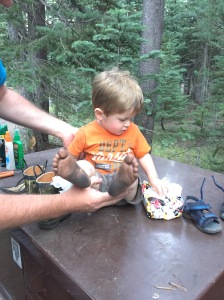 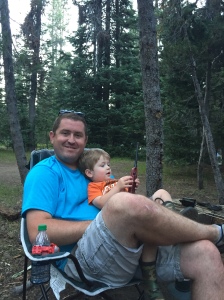 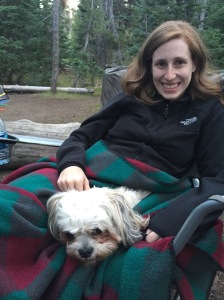 Getting in some snuggles with Toby 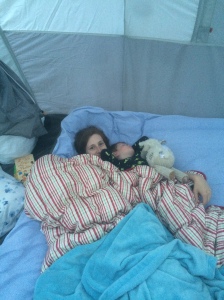 What a unique night we survived! 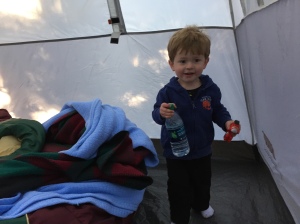 Hanging in the tent while we pack things up 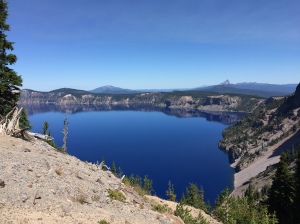 Loving the view of Crater Lake 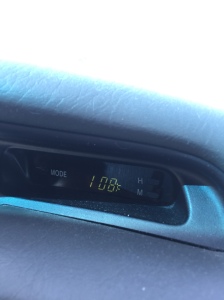 A very hot ride home! So glad for AC in the car! 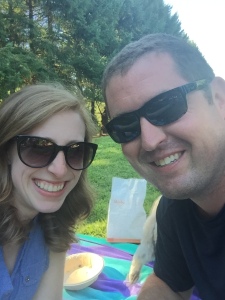 Dinner in the park 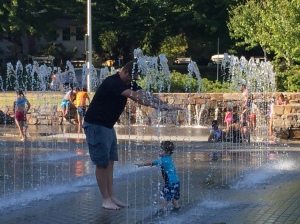