Happy May Day! We are officially into a new month. I’m going to spend the first day of May doing lots of a laundry and hopefully getting a nap in at some point. Our last week of April was quite the adventure. Now that we are on the other side of our April adventures, I’m looking forward to some recovery days before the month of May explodes on us… because it will… very soon. But enough about May, let’s recap how April ended.

This last weekend was a busy one for me. Jeremy and I were preparing to attended Annual Conference in Coeur d’Alene, ID. Each year in April, the Assemblies of God meet to go over business and catch up. Of course, we see everyone that we only see a few times a year, so there are a lot of conversations. As an introvert, the conference schedule and all the talking really drains me, plus being pregnant doesn’t make me all the high energy to start with. I’m getting ahead of myself… Last weekend, was a lot of cleaning, packing and preparing to be gone. This was the first trip that Owen was not going to take with me. The time for our first nights away had come. I tried to think through all the details and help my parents be as prepared as possible for their time with Owen. We ended up practically moving him into my parent’s house, but everything went well so I think it was worth all the effort.

On Sunday, we had our growth group which meant for a longer day and a later night. At about 10:00pm, I started to cry because I realized how much I was going to miss Owen. I’ve never really “missed” Owen because we have always been together. The longest we had been apart at that point was like 8 hours. I knew that during the day, Owen does great without me. I was worried about nights though. Owen’s sleeping pattern has been morphing over the last few weeks and I really didn’t want him to keep my parent’s awake all night long. Once I started to get emotional about leaving Owen, I knew that I needed to go to bed ASAP. The tears were from exhaustion and my emotions were running away with me. I’m pregnant, so they do that from time to time.

Other than the short meltdown on Sunday, I did great and so did Owen. We both survived the absence of each other just fine. My mom had decorated the guest room with Mickey Mouse stickers to make it feel fun and kid like. They had also purchased some new toys and Owen was totally enthralled with all the goodies at Grandpa & Grandma’s. Monday before we left, I tried to get a picture with my boy, but he was too busy with playing to want to stop and take a picture with me. He was also too interested in the new toys to really care that we were leaving. I guess that is the way you want things to go.

While the updates from my parents were brief, they were all positive, so I was able to not worry about how Owen was doing. He was in good hands. Like I mentioned, conferences are hard on a pregnant, introvert, but there were a lot of bonuses to not traveling with Owen. Jeremy and I were able to check in with one suitcase each. There was no need for multiple trips to the car to unload baby paraphernalia. Since we had to eat every meal out, it was great to not worry about how long Owen would last in a restaurant before he got bored and wanted to run around.  There was no need to worry about how the conference schedule would jive with Owen’s nap schedule or meal schedule. It was great to be at the conference and focus on the task at hand without having my attention divided. I’ve gone on a few work related trips with Owen and they were hard. Little kids and adults have different needs, so I’m usually the one that separates from the group so they can do what they need to do with the distraction of a little one. It can be isolating for me. I was grateful for this experience. I’m also beyond grateful that Owen did well and that my parents seem to think that they could handle having him again in the future… Is next week too soon? Just kidding!

Below are a few photos from the week. Taking pictures was weird without Owen around to be my main subject, but the Coeur d’Alene area, walks with my hubby and yummy meals soon took the focus of my camera. I joked that I would take no pictures for the week without Owen around. I proved myself wrong in that regard. Oh and one last minor detail from our trip, on the way home we stopped to say hi to our east side family. I got to hug and snuggle with my niece and nephews, so that was really the icing on the cake! I was a happy auntie! Okay, now all the highlights have been covered!

The weekend before we left, Owen hijacked Jeremy’s breakfast. We learned that Owen likes french toast!

Too busy playing to care that we were leaving

Moving into Grandpa and Grandma’s house 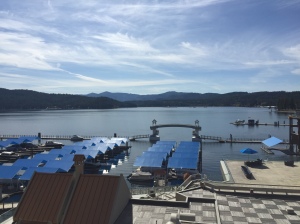 Our view of Lake Coeur d’Alene from our room

Breakfast on the first day! Gotta love the view and the company! 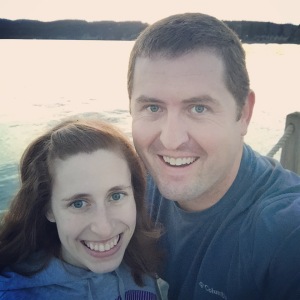 Going for a walk with my sweetie

Jeremy and I shared this dessert after our walk. We couldn’t finish!

Hanging with my niece and nephews!