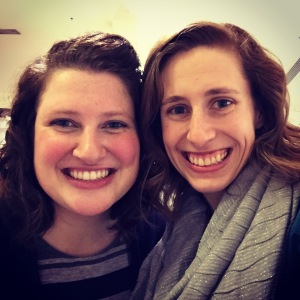 My last post talked about how we were finally coming out of the haze of sickness and my plan to end January was a busy one. Well… That didn’t pan like I thought. The weekend was fine. Last Friday, I drove up to Tukwila for a lunch date with two of my favorite ladies – Maggie and Summer. Jeremy had a busy weekend with a work party and a Frozen movie showing at our church. Monday, Jeremy and I had a ministers dinner for work, so we went to that while Owen hung out with Nana & Papa. I was super excited because the next morning, I was going to take Owen swimming with our MOPs group, but Owen woke up with a runny nose and a random cough. I would say that Owen was right on the fence of being sick and I didn’t want swimming to tip the scale to the side of sick. We ended up stayed home. Luckily, Owen doesn’t know all the fun he missed out on, but I know he loves to swim and play in the water. It was definitely a hard opportunity to pass up. Despite the snot, I had a student come over and hang out on Tuesday night for a few hours. It was great to catch up with her. She let Owen text on her phone and make phone calls to her friends. Owen that was a blast and has been disappointed that I won’t let him do the same thing on my phone now.

Enjoying the sunshine on Monday

Wednesday was supposed to be a lunch date with a good friend, but she came down with a bug, so those plans got postponed until this week. Owen’s nose was still running pretty good on Wednesday. Jeremy stayed home from church with Owen since we weren’t sure if he should be in the nursery. Wednesday night was pajama night with my class. We were going to watch a movie and have root beer floats. In the middle of pouring the root beer floats, the power went out to the two back classrooms that the girls use. My mom’s class next door was doing a pancake night and they had plugged in too many griddles thus blowing a fuse. I had to run out to the foyer to find someone who could help us. The security jumped right into helping us and soon the power was back on. Of course, I got comments from many adults on my pajamas. I was unfazed when I walked down there because I’m so used to wearing pajamas, I forgot that the rest of the world would find my outfit weird. I had to explain that our class was doing something special that night. When I finally got to playing the video I wanted on my laptop, I realized that my new laptop didn’t have the internet access code plugged into it. It’s a 40-key code with lots of letters and numbers. I had to call Jeremy for the 2nd time (after the fuse fiasco) and get the code. Once we got that to work, the internet signal wasn’t strong enough in our classroom so we had to relocate to another room closer to the router. As you can tell, it’s quite the night. Very crazy.

Texting with Lacey on Tuesday

Thursday and Friday, I had plans that also got canceled due to Owen’s nose and the illness of other kiddos he was going to hang out with. This week was supposed to be ultra busy, but the germs had other plans for my family and friends. It was still a fun week though. I don’t mind things being quieter than expected. Then Friday and Saturday were around the house days.

Sunday, of course, was the Super Bowl. My parents had invited us up to watch the Super Bowl at their house. My dad has a media room with a huge TV and a large sound system that makes watching the game up close and personal. My sister and brother-in-law came as well as two other families from our church. The parents all went upstairs to watch the game and that left my mom, sister and I down stairs with 7 kids ages ranging from 1 to almost 10. It was a bit chaotic to stay the least. I munched on way too much snack food and April and I kept up with the game on mute in the background. My dad had the game time-delayed upstairs so April and I always knew what was going on before the main group of football fans. While the Seahawks were winning this power felt awesome, but toward the end of the game, we were sad to know that they had lost before the group did. We heard them cheering upstairs and we knew it wasn’t going to end well. Then things got quiet upstairs… and we knew that they knew it too. Despite the sad and dramatic ending to the Super Bowl, we had a great time and a lot fun.

Now you are all caught up on the happenings of the Scott family. Apparently Owen will be sick about every two weeks and his runny nose runs our lives. I’ve talked to so many moms with older kids that say that they remember these always sick days. It’s good to know that this isn’t odd. Also, Owen wasn’t deathly ill, but I’m always cautious when it comes to sharing germs. I would hate for our germs to infect another family. Despite the change of plans and the slower pace, I would say that we had a fun and zany week.

New backpack! We are going to use this as his diaper bag now, so Owen can carry around his own stuff.

Goofing around with pillows and blankets 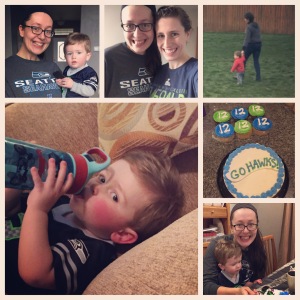