This week has been a bit odd. On Monday, my good friend Kaly brought her boys down for a play date with Owen. It was interesting to watch Owen interact with other kids who wanted to play with his toys. Let’s just say that sharing is not too high on his list of social skills. My guess that is that in the nursery at church it’s not as big of a deal because the toys there are not “his”. Kaly and I spent the time chatting and making sure that each kid had something to occupy them. Also, my dog didn’t attack anyone, so this is considered a good play date in my book! It was really great to see Kaly and catch up with her. She is such a busy lady. Time with her and her boys is precious. Tuesday was my MOPS Christmas party. My baking skills lately have been horrible. Instead of making something to bring, I ran through Starbucks and bought a tray of Cranberry Bliss Bars. I had to cut them in half so that there would actually be a number worth sharing. It was the easy thing to do and I might have eaten all the leftovers. Just maybe! Sadly, after the morning at MOPS, Jeremy came home with us and proceeded to fight a fever for the next day. It was nice having him around on Tuesday/Wednesday, but I was super bummed that he had to be sick in order to see us. Wednesday night, I bundled Owen up and took him to church. This would allow Jeremy some time at home without Owen and I to distract him. Turns out Jeremy ended up watching cartoons the entire time we were gone. He discovered Star Wars Rebels on Disney XD and his life was changed. I was glad that he could rest and recover and just do his thing.

Wednesday night was a special night of the year of my class of 5th/6th grade girls. A few years ago I started a new December tradition for my class. We now have a Gingerbread House Decorating Competition every year. I buy the pre-made kits that come with all the decorating supplies. This truly is the way to go. The houses are sturdy and all you need is supplied in the box. The girls always think that the supplied candy isn’t enough, but at the end of the competition they find that is truly is more than enough. I divided the girls up into three teams by having them draw numbers. The girls were judged on teamwork, creativity, use of supplies and overall appearance. The teams all did great this year. In fact, the girls gave team names to themselves, so Team Peppermint was our winner. Team Elf Bunny got runner up because they had the best use of teamwork. And sadly, Team Baby Jesus brought up the rear. I know, it doesn’t seem right that Baby Jesus would be last. Sad story. Overall though, everyone had a good time. The girls were allowed to destroy and devour their creations after it was all said and done. I also brought a class snack, so their combined sugar intake was off the charts that night.

Thursday night turned out to be pretty wild for us! We had a wind storm blow through the pacific northwest. Our power went out sooner than we expected. By 4:00pm we were powerless and set for a night in the dark. Owen ate dinner by lantern light and then spent a majority of the night running around with a mini-flashlight in his hands. We waited for things to quiet down a bit and then we ran into town to get some oil and gas for Jeremy’s generator. A few Black Fridays ago, Jeremy came home with a generator from Cabelas that was a fabulous deal. We lose power fairly often where we live so it was only a matter of time before we needed to use it. This Thursday was the day that the generator got to leave the box and fulfill it’s purpose. The purpose of the generator was keep our fridge and freezer running so we didn’t lose any food inside. It was odd to go to bed in the pitch black to the hum of the generator. Also because we didn’t have our baby monitor system to work with, we set the baby gate up at our door to keep our dog in the room, but the door was open so we could hear if Owen was crying in his room. Luckily for us, the power returned about 2:00am before Owen’s early wake up. I was able to turn the monitor back on and things went back to normal. I was very intrigued to see what Owen thought of the power outage. He was interested in the candles but they were all out of reach. No fun. The main highlight was running around with that mini-flashlight. With that flashlight in hand Owen had no fear in going into any of the dark rooms. I now know that if it’s a rough night and I’m home alone, I’ll just turn off all the lights and give Owen a flashlight. Hours of entertainment at my fingertips!

Well, that about sum up the interesting points. We all went out to breakfast on Friday morning to celebrate surviving the storm. Jeremy and Owen went over to Nana & Papa’s to help take down a tree that had fallen during the the storm. I took a nap while the boys were away and it was GLORIOUS! Today, we braved a few stores for Christmas shopping reasons and random reasons. Now Jeremy is at a lighted tractor parade helping our kid’s choir sing on our float. Owen is down for a nap and I am enjoying a small window of quiet! It’s delightful! 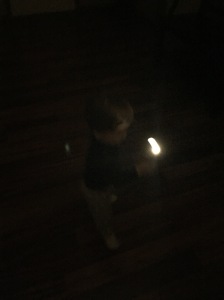 A boy and his flashlight

2 Responses to “Gingerbread Houses and a Windy Evening”