In what feels like a flash, here we are on Owen’s first birthday! Oh my! We celebrated his birthday this weekend with two parties and over the course of the weekend, I was feeling good because he wasn’t one yet. Officially. We were celebrating, but he was still my baby. But now he is one. I have mixed emotions about the big milestone birthday. Mostly, I am grateful that he has survived us and we have survived him. He has changed so much in the last month, he really is a toddler now. Mainly because he is officially toddling. He is walking and has been pretty steady on his feet for about a week. I had guessed that he would walk before his first birthday and he proved my hunch right. I’m a little sad that he has entered into a new phase. The baby phase felt too short. However, this is an exciting time as Owen learns new things. Walking was a huge accomplishment. I have a feeling his vocabulary is about to take off. Currently, Owen can say Mama, Dada and up. He is getting very good at saying things back to me though. I have heard words like out and bop and pop. Of course there are lots of other jabbery words he says. I’m thinking they might soon make a little more sense. In the back of my mind, I keep telling myself he is still a baby because he can’t talk back at me yet. I keep finding reasons to keep him a “baby”.

Here are a few things that are new with Owen this month. After our Canada trip, Owen was done with car time. He would clap whenever the car stopped as a way to celebrate. He knew that he was going to get out. I find this funny. Now when Owen wakes up in the morning, I hear him saying “up” and I go into his room to see a baby standing and bouncing in his crib. The top of his crib shows where he is a bitten the crib while waiting for me to get him out bed. It took me a while to realize that those dents in the crib and the missing bits of finish were thanks to Owen’s teeth. At this time, Owen has four teeth (two on top and two on bottom) that are very prominent. He has two more on top just breaking through for a total of six teeth in his first year. He is putting those teeth to good use trying everything new. If he sees you eating then he must try what you have. Owen demands that everyone shares with him. He loves to feed himself and gone are the days of feeding him soft foods with a baby spoon. He simply pushes our offerings away. He wants to feed himself, but he isn’t too handy with a spoon quite yet.

Despite his love for feeding himself, Owen was a bit unsure what to do with the cupcakes he was served at his parties. First off, yes, I know two parties might seem like a bit much. Jeremy and I both have large families and it would have been hard to house everyone at the same time. We hosted one at our house for Jeremy’s family and then one at my parent’s house for my family. This saved my out-of-town family a half hour in travel time since they were already making a long trek down for the party. But back to the cupcakes. Owen licked at the frosting, but really didn’t go at it. His first cupcake might have scared him off a bit. We lit a candle and sang to him. Owen went to reach for the flame and Jeremy and I both pounced on him to keep him from the flame and blow out the candle. I think the flurry of excitement scared him and who knows if now he associates cupcakes with being attacked by his parents. I’m sure someday he’ll like them.

Owen did well at the parties despite the interruption to his nap schedule. He showed off his new walking skills and for the most part seemed interested in opening his presents. It was fun to have him be a part of the process because last Christmas we just opened everything for him. This time when it came time to open gifts he could participate. It was a big weekend, but a fun weekend. We’re now snacking on leftover party goodies and marveling that it has indeed been a year since Owen entered our lives.

Owen is a crazy kid! He can be silly and goofy and sometimes he has a short fuse. He wants to see and explore. He is learning new things so fast. He currently loves cars, trains and anything with wheels. He’ll sit in my lap and read books with me. In fact, he knows where his books are located and points at the shelf until I bring them all down. I love that he loves to read. Hopefully this will be a passion that we can share as he grows up. As a watch this little boy toddle around the house, I am amazed. He has the best laugh and the cutest smile. His untamed hair makes me chuckle. There are so many small little details that make this little creature the most lovable and fascinating thing there is. He is just too much. My heart can barely hold it all. I am grateful that this first year is only the beginning of the long journey we have ahead of ourselves. I know that there will be new seasons around the bend – terrible twos, potty training, preschool… Someday he’ll be officially grown up and hopefully set for a life that he loves. Even now, I pray for his salvation. I hope he loves the Lord at a young age and makes him the foundation of his life. I pray for the conversations that we have will have about God and the deeper stuff of life.. I know there is a lot of life – both good and hard – to lived and learned.

I know I say it a lot on this blog, but what a wonderful adventure this year has been and what an amazing adventure still lies ahead! A year… A whole year. It’s mind blowing! 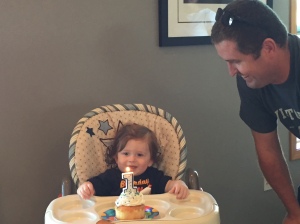 Wearing his new jersey and playing with his new toys!