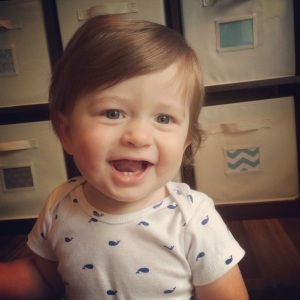 Owen is 11 months old! Where to even begin? It seems like in the last month Owen has grown and changed at a rapid pace. Last month, I was defending that he was still a baby, but now, I agree with Jeremy. Owen is starting to become a little boy. Owen loves to pull himself up on the furniture and walk along it. He can pull himself up on anything these days, even a bare wall. He has skills like Spiderman! He will even now take steps between pieces of furniture if they are close enough. He has learned the hard way that the love seat and the sofa aren’t close enough to cross over yet. With this surge of mobility, Owen is now one giant bruise. Falling down and picking himself up is a new way of life. Most of the time he doesn’t even cry when he falls because he is doing it so often. Jeremy and I have been impressed to see that Owen is standing up and staying up independently now. It’s only for a few seconds at a time, but we know that it’s just the beginning. I have a feeling walking might just be around the corner.

We’ve had to tweak things around the house (again). Owen wasn’t digging the baby fence set-up so we’ve moved the fencing so it covers only the wood stove. Now we just close all the doors and let Owen have free reign of our main living space. As a result, we finally had to finish baby proofing. We now have latches on the cabinets in the kitchen. I’m not thrilled about that, but at the same time, I couldn’t have Owen playing with my glass prep bowls either.  Until door knobs become an option, I think our house is as baby proofed as it’s going to get. There is something nice about letting him roam freely and not having to worry about him getting into anything he shouldn’t.

Owen loves to dance to music. He especially likes theme songs to television shows or the music that his little Scout dog toy plays. He claps while he dances. Owen will also clap when you say “good job”. He is so proud of himself. Since Owen is into everything, we have learned that he can pull the toilet paper off the roll and he can flush the toilet. I told myself this must be a positive thing. If only he was really preparing for potty training! Owen is truly in imitation mode. He wants to do what your doing. He wants to see and wants to try. It was cute while Jeremy was putting latches on the cabinets, Owen was right there with him every step of the way.

This last month we’ve had a boost in the finger foods department. Owen will eat pretty much anything right now if you break it into small enough pieces. He demands that you share your food with him. Current favorites are string cheese, yogurt and the Gerber Lil Crunchies. It’s been a lot of fun to watch the world of food open up for him. Going out to eat is exciting as we share our favorite foods with him and watch his reaction. He really enjoyed tortillas when we went out to Mexican a few weeks ago and he enjoyed a few tastes of clam chowder at Mo’s when we went to the beach. Jeremy made a spaghetti casserole this last week and Owen really enjoyed that as well. Trying new foods is a big part of his life right now.

An one other fun topic before I go… Owen’s hair! Yes, yes, yes! This kid has been blessed with hair! His hair seems to be the thing that everyone talks about first. I’ll be honest, it is a bit crazy. It’s long and curly in the back. It now falls into his eyes. We have tried trimming it in the past, but it grows really fast. He has been confused for a girl because of it and we realize that the first major haircut needs to be around the corner. So for those that are wondering, we have decided to give him a haircut after his 1st birthday. We don’t want to do a horrible job and have his hair look bad for his birthday pictures. Plus, he is only a “baby” for so long and I don’t want to rush him into be being a big boy. So yes, the big haircut is coming. Be patient with us!

Just one month to the big, milestone birthday! We are looking forward to celebrating with family and friends. I’m not quite sure what to expect because this is the first birthday, but I know it will be fun! I’m in planning mode for the festivities. The fall season is one of my favorite seasons. Last fall, I was so occupied with having a baby that I didn’t get to enjoy the season to my usual extent. I’m planning a few fall outings for the next couple of months. I can’t wait to share these things with Owen. I’m enjoying these baby days while they are here. He is certainly becoming a big boy mighty quick!