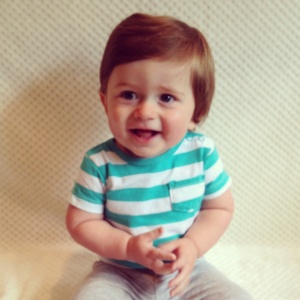 Wow, here we are 10 months of Mr. Owen. How did that happen? 10 months is a long time! Almost a year! Crazy! This last month has been a full one with baby development. Owen has started crawling. He is into EVERYTHING! Our house is fairly safe for children, but Owen finds all the spots that he shouldn’t play in. We are having to put latches on our cabinet doors to keep him from any harmful chemicals. Keeping Owen alive got more interesting with the addition of crawling. Owen can also pull himself up on furniture now. He thinks he is the coolest, but he doesn’t like how he can’t get around once he is up. Our church nursery has a toy that you can push to stabilize for walking, so Owen now pushes that around and walks around the nursery. As much as he enjoys crawling, he still would prefer to hold onto your fingers and walk around like a big boy. Mobility is a very big deal these days.

Owen continues to be loud. As I’ve had to “redirect” him lately, he has developed a blood curdling mad scream. It’s practically ultrasonic. On car rides, Owen loudly yells almost the entire time. It’s not an unhappy yell. It certainly is intense though. Jeremy and I really want to know what he is thinking! Owen doesn’t have any words yet. He is still sputtering out syllables, but nothing that makes much sense to us. He has started pointing at everything. He especially likes to point at things outside while looking through the window. He loves to give kisses. He kisses certain pictures in his books. It’s super cute. He loves to read books while sitting in my lap. It’s one of the ways I can keep him in one spot! Owen is also mastering waving good-bye. He usually does it after we walk away from the person. It’s a delayed wave. This week he learned how to clap! Now when he hears music or gets super excited, he claps. It’s adorable!!!

Just yesterday, we bought Owen a new car seat. He was getting too long for his infant car seat. It makes me kind of sad that he won’t be using an “infant” car seat anymore. He keeps growing up and becoming a big boy. In true Amy fashion, I’m already thinking and planning for the big 1st birthday! It will be here in a blink! I also went shopping yesterday for more 12 months clothes. Owen is right in between 9 months and 12 months when it comes to clothes. We also picked up a new toy that made Jeremy and I little nostalgic. Being a parent is fun because you can share the things you loved as a kid with your kid. Owen’s 9 month doctor’s appointment will be happening this next week (we know, a little late). We’ll have the current stats on Tuesday. I thinking Owen might have broken the 20lbs mark! We’ll soon find out! Keeping up with this kid is crazy, fun and wonderful! 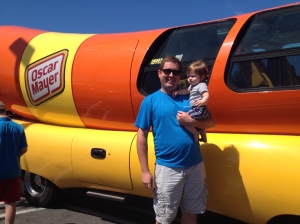 Stopping to get a weenie whistle! 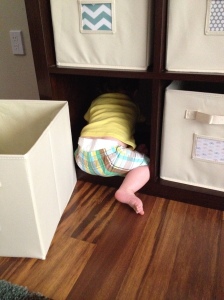 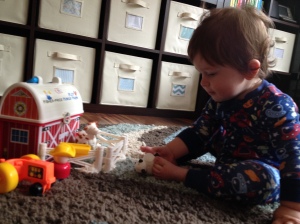 Playing with his Little People farm. Jeremy and I loved this toy as kids!