I’ve passed the mid-week mark. I am now in the home stretch of Jeremy’s absence. The week has been a good one. It’s gone better than I expected. I’ve maintained my watering regime and even got the trash can and recycling can out on time. Owen has enjoyed our adventures and he has gotten some new toys to entertain himself through this week without dad. Thanks to the wonders of FaceTime, Jeremy and Owen have had daily chat times and Owen really enjoys being able to see his dad on the screen. 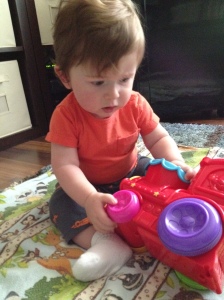 Like I mentioned in my last post, its been a week full of projects and visits. Yesterday, my big project was sorting and boxing up some of Owen’s baby clothes and moving them to the garage. Owen is still in 9 month clothes, but will be transitioning to 12 months sooner than I care to admit. Owen happily played in his room while I sorted his clothes. The other project was taking apart his mobile and getting it out to the garage as well. The mobile had become something Owen tugged on and kicked when he should be sleeping. It seemed like it was time to take it down. Now his crib looks weird… Something is missing.

New toys from Dad – Jeremy has left Owen a herd of new toys this week!

I had an odd experiment that I wanted to try for a while and today seemed like a good day to do it. I used to be addicted to Dr. Pepper (very hardcore in high school and college). Once I decided to stop drinking my calories, I couldn’t switch to Diet Dr. Pepper because if I couldn’t have the real stuff, I didn’t want a knock off. That is how my addiction transferred Diet Pepsi. It’s been years since I had any Dr. Pepper product and I got curious. Do I still like Dr. Pepper? Is Diet Dr. Pepper really has bad as I think it is? Is Diet Pepsi better than Diet Dr. Pepper? So I set out on an experiment. I poured each of the sodas into a cup that was labeled on the bottom. I mixed the sodas around until I wasn’t able to remember what soda was what. I then did a blind taste test. I was able to figure out which soda was what instantly. The verdict was surprisingly the same as the past. I still think Dr. Pepper is the best. Diet Dr. Pepper is a sad version of the good stuff, but it’s not as bad I remembered and well, diet pepsi…. It’s my second love, not my first. Now I won’t start drinking regular Dr. Pepper again because it has a lot of calories, but it was an interesting experiment to see my taste buds had changed over the years. Turns out that they haven’t. Also, I should mention that I couldn’t let the sodas go to waste once I opened them. I’ve now had double the caffeine I usually have in day (it’s still less than a cup of coffee). I’m hoping it will give me a little extra get-up-and-go as I finish out the day.  We’ll see!

Since it’s Wednesday, I have church tonight. Half of my class is summer camp with Jeremy, so I’m expecting it to be a quiet night. For the girls that do come, we’ll have outside play time,  a card game and root beer floats. We’ll take a night off from the serious stuff since it will be a small dynamic. Breaking routine is fun every once and a while and hopefully it make the absence of our classmates a little more bearable.

That’s the update. Jeremy should be reunited with us soon and we are looking forward to it with great anticipation!

2 Responses to “Soda Experiment & Other Randomness”