Owen is half a year old today. We have hit the 6 month milestone. 6 months is a big deal in my mind because it is the tipping point for the year. From now on he will be closer to age one than to being a newborn. So crazy. Owen has changed so much in the last month and really even in the last week. Jeremy had his first overnight commitment since Owen was born this last weekend. I wasn’t quite ready to be on my own with Owen for 33+ hours so I invited my sister over to join me. In just that short overnight period, Owen mastered sitting up unsupported, jumping in his jumperoo and babbling. It was an incredible change all in the blink of an eye!

Owen loves to play with toys. He especially loves to sit and play with them. Jeremy got him a new activity cube that he can use to play and support himself. The cube has been a fun addition to the toy rotation. Owen loves his toes as well. He is often grabbing them and rolling from side to side. He loves to pull off his socks and suck on them.

Another big milestone is Owen is now a crib baby. For the last four months, he has been sleeping in his Pack’N’Play in his room. This wasn’t ideal, but he slept so well in it that we just kept him in it. I was going to make the big crib transition after our Canada trip, but I wanted sleep so badly that I just let him keep on sleeping in the Pack’N’Play. I told Jeremy that no matter what, come 6 months, Owen was going to move to his crib. Last night went better than expected. We did have a rough hour between 12:45-1:45am, but things could have been worse. I’m hoping that he’ll continue to get comfortable with his own crib and soon he’ll get back to old ways of sleeping through the night. Progress is being made!

It’s fun to listen to Owen babble now. He really likes saying “a-da”. He is well on his way to saying “Da da”. Jeremy should be thrilled about that. While, I’m sure he didn’t mean to, I’m positive that Owen said “no” this last week! Jeremy heard him say something close to “hi” this weekend. It will be fun to see his vocabulary develop soon.

So far no teeth have made an appearance. I’m kind of a okay with that. Owen still chews on his thumb like it’s the best thing ever. He also licks everything he can get his hands on! We tried finger foods for the first time yesterday because Owen has been so interested in our food. He has the pinching part of finger foods down, but he isn’t quite sure what to do with the food once he has it in his hand. He certainly makes a face when it hits his tongue. Owen is getting really good at drinking out of a cup. He really loves to drink like a big boy. As you see, never a dull moment. Owen is growing, developing and changing quickly. It makes life one big adventure. Each day is full of snuggles, love and fun, for sure!

Playing in the jumperoo 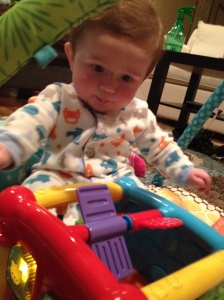 This is what happens when Jeremy goes out of town!