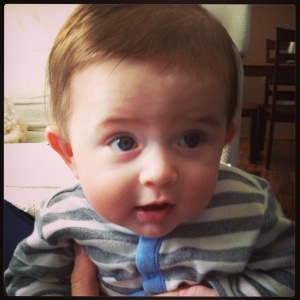 Owen is officially 4 months old today! It’s gone fast. He keeps getting bigger and bigger. He has already doubled his birth weight and  then some. My arms can tell that he has been putting on the pounds. The last month has been a tricky one with Owen at times. As I’ve gone back to work, we’ve hit a few speed bumps. He sometimes decides that he doesn’t want to take a bottle. My mom has been great about working with us as we try to figure out what Owen needs on a daily basis. He can have moments of extreme fussiness as well. We wonder if the fuss may be related to teething, but so far we can’t see anything trying to pop up in his mouth.

The development of the fuss has led the development of more diligent nap times. Before I would let Owen sleep anywhere. Mainly, he would take his naps in the bouncer in the front room while I did stuff around the house. Now I am intentional about putting him down for naps in his own room. These naps usually last longer because he is away from distractions. The average day could hold one 2+ hour nap or maybe he’ll break it up into 3 naps that last about 45 minutes. On Wednesday, he took 2 naps that lasted about 2 hours and then a 45 minute nap. I’m learning a lot about reading his tired cues. It seems that he wants a nap about every 2 hours or so. When Owen is not napping, we have a pattern of play time, bouncer, helping mom with chores in the front-facing carrier and bath time.

Toys are starting to become very exciting. He will reach for them and put them in his mouth. His favorite thing to put in mouth right now is his fist or two fingers or a thumb. He often gags himself as he jams his thumb down his throat. Smart, huh? Owen also loves the sound of his voice. I would say that the days of baby coos are gone, but Owen has surprised me this morning and has been talking up a storm in cute little coos. Most of the time, Owen only has two volumes – quiet or loud. He shrieks in delight and he screams when he is upset. Everything comes out loud. He loves to laugh and smile and play.He is an active boy and goes all out in everything he does!

Trying to get the “4 month” photo this morning

One of our hurdles right now is transitioning Owen from his newborn napper into his crib at night. This has been a battle that I didn’t anticipate. Because he sleeps an average of 9-11 hours a night, I haven’t wanted to mess with his sleeping arrangement too much. If it’s working, it’s working. However, he will soon be too big for the napper, thus the “newborn” part of the napper title. He just loves being snuggled in it. He’s taken what I call “flat naps” to train him to sleep flat, but he only seems to put up with naps. Oh well. It will work itself out, I’m sure. I have decided that our next baby will not know the goodness of the newborn napper. They will sleep flat from the very beginning. I will not do this again. I have lived and I have learned.

It’s such a joy to watch Owen grow and develop. He has such a personality. As he has gotten bigger, there are a lot more comments about how he looks like Jeremy. It must be the big head or something. Owen does look a lot like Jeremy these days and I’m just fine with that because I happen to think that Jeremy is pretty cute! Taking Owen into stores can be quite the task. We get stopped by multiple strangers so that they can admire Owen. If people aren’t bold enough to stop and talk with us, we often here whispers behind us as we walk through the stores – “Did you see that cute baby?” I keep saying I should send head shots into Gerber. The funny thing about our “cute” baby is that he has pretty crazy hair. There is one section in particular that loves to stand straight up. I have don’t even battle with it anymore because it just bounces back. If he becomes a baby model, we might have to work on section of hair a bit.

This Monday is Owen’s 4 month appointment, so we’ll know his officially stats soon. My guess is that is he close to 16 pounds, if not already there. We’ll see. It’s been an exciting 4 months and Owen has been a great addition to our family even though he does bring a bit of nuttiness to the mix. However, the way I see it, we are all a bit nutty here, so he fits right in! Happy 4 months, Owen!