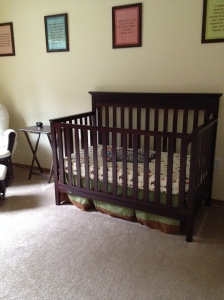 So small in his big crib!

Something happened the week of Thanksgiving. It just clicked with Owen that he should sleep at night time and he should sleep for long periods of time. Let me tell you, I am GRATEFUL!!! I am a much nicer person when I get sleep. I feel more human and life feels doable. I’m not as overwhelmed because I’m not overly tired. Praise the Lord! Our norm now about 8 hours of solid sleep for Owen.  He has done more than 8 hours the last few nights. It’s been three nights of 9, 9.5 and 10.5 hours of sleep. I’m almost scared to write this blog because I’m scared of jinxing the magic.

This last week I did a whole lot of research on sleep and baby schedules. It seem like there are a million opinions out there and honestly,  it just confused me more than anything. There doesn’t seem to be a set rule for such things. We haven’t been too scheduled with Owen. He sleeps when he is tired. He eats when he is hungry. If he is asleep we don’t wake him up unless we have to. Things are working out okay. The only standard thing we have been doing is putting him down to bed between 9-10pm each night. We do bath time every other day. As for a schedule, Owen takes naps mostly in his bouncer in the living room. He is also a great sleeper for the most part if I am out running errands.  He sleeps pretty well in the mornings and then the naps seem shorter in the afternoon and evening.

My research last week centered mainly around sleeping through the night and moving babies to their own room. I wasn’t exactly sure what the definition of sleeping through the night was. Now I am positive that Owen is sleeping through the night. However, he is still in our room at night because up until this point it’s been easier on us. I didn’t really want a bunch of back and forth between his room and our room in the middle of the night. With these all night stretches of sleep, I am feeling more confident about moving him to his own room. Jeremy has some time off from work next week, so I think we’re going to start the move next week when we’re home a bit more and can have a freer schedule.

To start the transition to sleeping in his room, I put Owen down for his morning nap in his crib for the first time today. It took a lot of coaxing to get him down and he only stayed asleep for about a half hour. A little later towards lunch time, I tired again. Once more, he made it about a half hour. My thinking is that Owen is used to sleeping the living room and he can see me when he goes in and out of sleep. I’m guessing he gets upset when he wakes up and no one is there with him. I was about to do a third attempt of nap time in the crib, but Jeremy surprised me a quick stop at home to pick up some supplies for tonight. I was just about to enter the nursery when my dog alarm went off (thanks Toby) and Owen’s eyes opened. He gave me that look like “Seriously, you’re putting me in here again.” So, I turned around and Jeremy got a few snuggles in before having to leave. Since Owen was now awake and the super sleepiness had worn off, I caved and put him back in the bouncer – where he is now napping. I’ll try my efforts again tomorrow.

I’ll keep you posted as we enter this new territory. I have no clue what I am doing. I’ve never transitioned a baby to a new room before. I am not confident and I really don’t want to scar him. I will be glad to have the Pack’n’Play out of our bedroom if this transition goes well. There is a very small space between the Pack’n’Play and my dresser. It can cause some congestion in the flow of the room. It will be great to have the space back. However, it hasn’t been too much of a hardship having Owen close at night. Our set-up has worked quite well. It will be strange to move all his stuff out to his own space. Right now we even have his clothes in our closet.

Our little roommate might be moving out soon. I’m really praying this is a smooth transition. A sleeping baby is a happy baby in my book. I want to do all I can to promote sleep.  I know that he is a happy baby and a good nights sleep is an important part of that happiness – for Owen and for me! 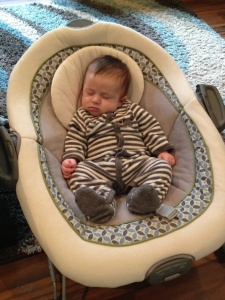 I caved! Back to the bouncer!