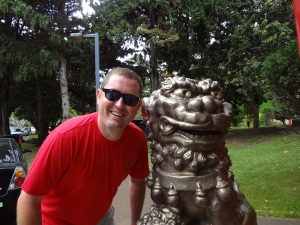 Saturday was a free day. We didn’t really go into it with a lot of plans. We made a yummy breakfast of banana pancakes with coconut syrup and fresh fruit. I had never made banana pancakes before so my sister explained the process – mash bananas and then make the mix in the same bowl. Simple and tasty! The coconut syrup was really good, but it slightly got lost in the banana flavor. After breakfast, we did some local shopping around Kihei and Wailea. The local shopping looked a like used junk – especially in Kihei. We stopped at the Shops at Wailea as our second stop and they were very upscale, so we saw both sides of the shopping scene. We stopped by the Honolulu Coffee Company – Jeremy got a Nutty Hawaiian Latte and I got a coconut creme drink that was amazing! 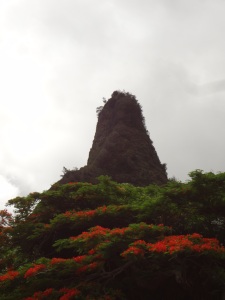 The morning was spent looking around the shops and then we headed back to the condo for lunch. I ate a lot of PB&J sandwiches in Hawaii which I know isn’t tropical, but it was good for the budget. We ate the condo quite often. The only downside is the condo kitchen was pretty tiny. 3 people was about the max it could hold, so we all made our meals in shifts. At this point, we had no plans for the afternoon so Jeremy pulled out the Maui Top 10 book we had brought and started to look for must see sights that weren’t already on our to-do list. This led us up the Iao Valley. The scenery got greener and more tropical which I know my mom and grandma really appreciated. We stopped at a Cultural Garden and saw some beautiful plants. You could tell this was a local hangout because all the barbeque areas in the park were packed. It looked like multiple parties were going on. The food smelled awesome! I almost pretended to be a part of the group just to get some of that food. At the gardens, Jeremy found many stone dragons and of course, he had to have his picture with them! 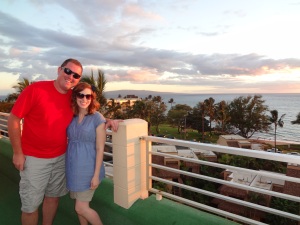 Sunset on the roof!

We drove up a little further from the gardens and saw the Iao Needle and a lovely view of the valley down to sea level. The needle is believed in Hawaiian culture to be a demi-god who got turned into stone. Not a great fate if you ask me, but a nice area to hang out. The great thing about going up the valley is the temperature was cooler so it was the perfect trip for the middle of the day.

Once we got back to the condo it was dinner time! We made tamales and flautas with beans and rice. It was very tasty! The evening ended with sunset on the roof and then Huapia cake (a Hawaiian coconut pudding) for dessert. We had huapia at the luau the texture was a little a weird, so we were curious to see what it was like in cake form. The haupia layer on top of the cake was not as firm as the luau and the rest of the cake was a white cake with coconut flakes around the side. Very good! When you first took a bite it seemed tame, but as you kept eating the sugar caught up with you! It was fun to try another Costco pastry that we don’t have at home.

And that was how Saturday ended!