Thursday morning I awoke to the sound of birds singing promptly at sunrise. I quickly learned that this would not be a trip where I would be sleeping in. By 5:45am, Jeremy and I were out the door and down to the beach. The early mornings right around sunrise became my favorite time of day – only on island time, this didn’t translate back to the mainland. Plus, 5:00am on Maui is really 8:00am in Washington this time of year. So it wasn’t a big deal getting up between 4-5am every day. Jeremy spotted sea turtles right away and then continued his sea turtle streak the entire trip. Not a day went by when my hubby didn’t spot a turtle. He is a bit of a nature guru! Jeremy “talked” me into walking waist deep in the ocean by pulling me in. It was crazy to be in the water so early in the morning and be warm. In fact, the temperature in the morning was perfect. It was in the 70’s and less humid so it was right up my alley.

Once we got back to the condo, we waited for the rest of the family to stir and we started to get ready for our day. We knew our plans would take us to Lahaina, but we didn’t want to get there too early and run out of things to do before our luau later that evening. We decided for the morning that we would drive further south and explore Wailea. We ended up on the beachfront path and diverted to explore the Grand Wailea Resort. It was beautiful. The wedding chapel (which I had seen on an episode of Jon & Kate Plus 8) was delightfully chilled with AC. I could have lived there and contemplated sleeping there at night, but they probably lock the doors so stuff like that doesn’t happen… oh well! We took pictures by waterfalls and looked through their lobby and shops. It was a fun morning. After our exploration time, we headed back to the condo to make lunch before heading north to Lahaina.

How would I describe our trip to Lahaina? In one word… HOT! The afternoon heat had picked up and their was no breeze. It made for a very warm walk around Front Street. We stopped by the Banyan Tree which was amazingly huge. We ate our fair share of samples at the Honolulu Cookie Company (we did this twice because we hit their second location in Lahaina later that afternoon). Because of the heat, my dad decided to treat us all to shaved ice which abounds in Hawaii. I had the “Lahaina” combo which was coconut, pineapple and banana! It was super tasty and a nice chill. 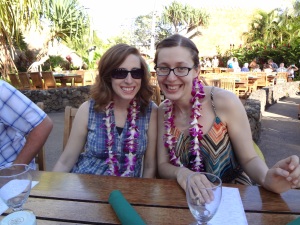 The luau was that evening and I was excited to receive my first Hawaiian flower lei. It was one of the reason I wanted to go to this specific luau. Some other luaus give you shell leis which I know are easy to take home, but I wanted a flower lei really bad! The time before the meal started was filled with activities – hula lessons (which my hubby did so he could play with the noise sticks), professional photographers and painters, they had island crafts and of course, an open bar. You could watch them unearth the piggy that would be dinner that night. Because of the crowd I only saw the mound of dirt which our meal was buried under. The food was really good. Our server, Randy, was super nice and reminded me of a friend back home. He encouraged us to try everything, but I didn’t do that. I skipped a few items and took multiple dinner rolls and slices of a banana bread. I’m a carb girl, what can I say! For the most part I liked everything that I took with the expectation of the pork wrapped in taro leaf. The leaf was icky. After our meal, we watched a traditional Hawaiian hula that explained the history of the islands. Overall it was a very entertaining and satisfying experience.  The only two downsides would be – I spotted two cockroaches on the lava wall by us (GROSS) and the time change made it really late night. Poor Randy didn’t have a rowdy crowd to work with because we were tired from the long day and time change. Thankfully we made it back to condo safe and sound and slept with full tummies!