We had a doctor’s appointment today. Normally we wouldn’t find out the sex of the baby until our next appointment which is the anatomy ultrasound with the technician. However, our doctor agreed to give us a sneak peek since we were far enough along. At first the baby’s legs were crossed which the doctor thought was cute, but made me think that we weren’t getting any news today. Honestly, I had to told myself not to get my hopes up. Things might have been unclear and we could have walked out of that room with no hint. Since Baby Scott seems to be an active little one, we eventually did get a view. 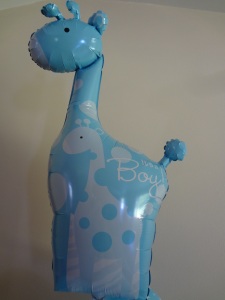 We’re having a BOY!!! I thought we were having a boy from the beginning. Yes, I would have been excited if it was a girl. I get girls. I’ve built my ministry around girls and being a girl, I have a slight clue to how they are wired, but boys… Oh boys… I don’t understand them! I guess it’s time to learn! The doctor told us to keep the tags on anything blue we went out to purchase for the next month. She really wants to confirm things next time, but we all agreed that we could see the “parts” and she explained to us how she came to her conclusion. I’m fairly positive we’re having a boy. It’s hard to disagree with the photos. I won’t buy anything until after the next appointment, but at least I have some time to wrap my mind around a boy! A BOY!

Since we’ve really lacked in creativity up until this point with sharing our news, we decided to have our local, immediate family over for dinner. We did give them the heads up that we might have nothing to share. But if we had news we wanted to tell them in person instead of a phone call or text. We contemplated doing doing a “gender reveal” cake or something of that nature, but I didn’t want to be rushed when we got home to make something cute. We thought about keeping the news even a secret from us and giving a baker a seal envelope. However, going through a bakery would mean waiting even longer to find out ourselves and waiting even longer to tell people. I’m glad now that I found out before the rest of my family instead of at the same time. It allowed me time to process before I saw their reactions. I didn’t have to be worried about my own reaction in front of an audience. In the end, we bought a bundle of balloons that say “It’s a boy” and we brought them out once everyone arrived!

We polled the audience before bringing the balloons out just to see what everyone thought. The room was fairly split between boy and girl guesses. It was fun to see everyone’s reactions, especially the ones who thought it was a girl! I’m glad to see that it had to sink in a little bit for everyone else because it took a while to sink in for me. In fact, it’s probably still sinking in! The sweet thing was both families brought a gift, so now we can add another book and a healthcare kit to our list of baby supplies (the only other item at this time is a bib). It was very kind of them and totally unexpected! We’re so blessed by our families! I’m excited now in the next few months to start getting things for this little one. I’m sure it will become even more real as “stuff” starts to accumulate! Not just any stuff – blue stuff!

So yeah, it’s a boy! Just thought you would like to know!