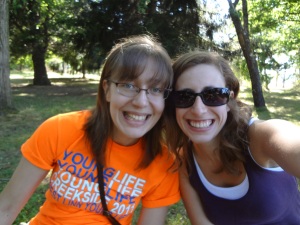 Dinner in the Park!

It seems like my sister and I have had opposite schedules this summer. We haven’t had a chance to hang out too much in July and August was starting to shape up the same way. Back in June, April and I made plans to go down to Saturday Market in Portland, OR while our hubby’s climbed Mt. St. Helen’s. The only thing that might have kept us from going was if April had to work this weekend, which thankfully she didn’t! We had a great time catching up while the our boys went fishing, camping, and hiking a mountain. I like camping, but the fishing and hiking part, I was glad to do without!

Friday night, April, Toby Dog, and I enjoyed Taco Ball in a local park. We sat a log and munch on our cheap Mexican food. April got to tell me a bit about her family reunion the weekend before with her husband’s family. Toby wanted to eat a taco and was generally a hot dog since temps had been in the mid 90’s on Friday! We took off for my house and planned a night of crafting. April had text messaged me earlier that week saying that she had the itch to craft. I jumped on the bandwagon and we prepared for a night of art projects! April’s project turned out great! She’s got really creative and the result was what she calls “The Leviathan”. My project turned out great and I was super happy with it. However, it is a birthday present for a student and on the off chance that she reads this blog, I don’t want to describe it or post pictures until after I give it to her.

With all our creative juices spent, we moved over the couch to watch Lifetime movies about troubled teens. It was great to just veg and be chill. This is probably one of the best things that April and I do together. We’re good at being active together, but we can always just kick back and relax. No need to be impressive or entertaining. It’s nice to just sit and be myself.

Saturday Market on the Portland Waterfront!

Saturday morning we were up early to head down to Portland for a wonderful time hanging out in downtown. April and I both have a special fondness for Portland and it’s been our favorite spot for years! Since we grew up in the area, there is a bit of childhood magic still associated with the land of no sales tax! We wandered around Saturday Market and walked to Pioneer Place. It was a lot of fun to look through the shops and get excited for fall shopping! Back to school shopping and sales were in full swing.

By mid-afternoon, we needed to head home to let my crazy dog out of the crate. It wasn’t a full, long day in the city, but it was perfect! This was the first time that April and I had gone to downtown Portland just the two of us. Usually we have parents or hubbys with us. It was nice to prove to myself that I could drive around downtown and not kill us! We made it everywhere we hopped to go with getting attacked or getting lost. The day was full of Starbucks, good food, window shopping, and lots of walking!

It was nice to spend some one on one with my sister and catch-up at the end of a busy summer. The boys had a great time hiking Mt. St. Helen’s. Both survived and Jeremy had many tales to tell me when he got home last night. The next adventure of the summer will be next weekend when Jeremy, April, Toby Dog, and I go camping! We still haven’t decided on a location, but camping is always a blast and I was super excited to find out that April’s work schedule allows her to come. The only downside is April’s husband, Andrew, has to work so we’ll be short a family member. I guess that means April get an air mattress all to herself! Unless Toby wants to share it with her!

One Response to “Sister Time!”