In high school, I wasn’t apart of the cool kid’s crowd. I did my best to survive and not stand out too much. I loved Jesus and wanted to reach my school for him, but it was in a quiet way through the relationships I had in my classes. I wasn’t a stand up on the soap box kind of person. Most of the time I was too scared of others to truly to be myself while roaming the halls of my high school. There was one place though where I could truly be myself. Of all the places in high school that I fit in the best – it would have been in the walls of my Spanish class with my crazy Spanish teacher, Mr. Chappell, who we called Profe. He wasn’t like the other teachers. He was a friend and a goofball. We had so much fun in his classroom. A small, mixed group of students joined him for lunch in his classroom every day. I was one of those few who had my lunch in Profe’s classroom away from the crowded commons. Profe was zany and he let me be my weird self. I was able to be just be me and it was okay. A lot of laughter happened in that classroom. We had a good time! There are so many different stories I could share. I have 4 years of classes with him to pull them from. I took Spanish 1-3 with him and then because their was no Spanish 4 at our school, I was his TA my senior year. Seriously, that was the best class ever!!! 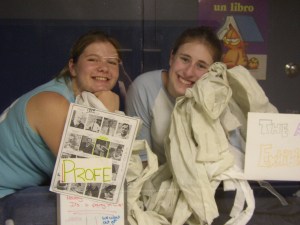 One of my favorite Profe stories would be the time I “flamingoed” and flipped his classroom. You might be confused on what this means… let me explain!  When my sister went to Centralia Christian School, they had this fundraiser were you could flamingo someone’s house. This meant that a group would go to the house of your choice and secretly put a punch of pink flamingo lawn ornaments in the front yard. They would do this at night so that way when the family woke up they would see that their yard had been flamingoed! I took part in this fundraiser by flamingoing Profe’s yard twice. Once April had graduated CCS, I couldn’t let the flamingo fun stop. I told Profe that I had to stay after class for some reason (probably something about not having a ride until later). I told him I needed a place to hang out do and homework. He gladly opened his classroom up to me and told me to shut the lights off when I left. Once he had taken off for the day, I proceeded to tape 100s of little flamingo pictures all over his walls, bookshelves, white boards, desk! Flamingos everywhere! I couldn’t stop there though!!! I turned all the desks in his classroom around so that they faced the back of the classroom and I turned all his books upside down. It was amazing!!! The next day Profe actually taught his classes facing the back wall because he thought it was too funny and didn’t want to flip the classroom around on his own. I really got him that time!!! There was also the time that my friend Amy and I put ourselves the display case that was accessed through his classroom and called ourselves “The Amy Exhibit” like we were in a zoo cage or something… or the time we covered his car in toilet paper!

Now what started this Profe blog was a text message from one of my first students. I first taught her class when she was in 4th grade and now she’s in 11th grade. She goes the same high school I did and she is a TA for her Spanish teacher. I got a text from her with a picture of a note that she found taped under her teacher’s desk. This note was taped there by ME almost 8 years go. The note says “Amy Vitzthum was Profe’s TA in 2003-2004. Today (4/23/04) she is very bored. She will remember this boring day forever!!! Yes, she spelt remember wrong, get over it.” (I scribbled out my misspelled remember). Also under the table was a piece of artwork I had made. Profe had a stamp that had the date on it. I used it for grading homework and apparently that day, I took the date stamp and made art of attacking a post-it note with it. The artwork was entitled “Lost in Time”. Very creative, I know!!! It made me so happy to see that something I created and taped under a desk was still there 8 years later and that a student I know would have found it! Jeremy told me it was like my time capsule at WF West had been discovered!

You won’t find my picture or name among the sports trophies, but you will find a post-it note under the teacher’s desk in the Spanish classroom. For those of you who thought this was some super spiritual blog about the legacy I’m trying to leave in ministry – sorry, it’s not! However, I do hope that I’m leaving a legacy of that kind! I was just super happy to see that something I made almost 8 years ago still exists. Will the note be there 18 years from now or 88 years from now? Who knows. At that point I doubt the students who happen upon it will know how I am. I’m okay with that. My name might not be immortalized in history books, but I’m really okay with it being immortalized in post-it notes!

3 Responses to “Leaving a Legacy”