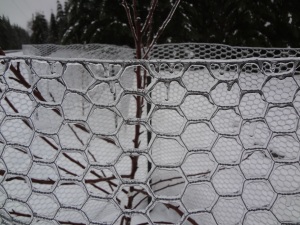 I have to admit, I’m pretty happy that I have the ability to be writing this blog! Yesterday around noon we lost our power due to an ice storm that decided to move in right after the snow storm. The combination of lots of snow and ice made for many downed trees and branches all around the area.

Remember how I said in my last blog that things could be rescheduled? Well, that is exactly what had to happen! I made some calls yesterday and learned that most places were closed and want everyone else to stay home. Since Jeremy and I were still trapped in our house, now covered in ice, we knew that it was anot 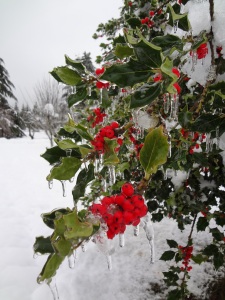 her snow day for us… I mean, ice day! Jeremy got the house all warm with our wood stove and then sat by the window with it open. Why would he do this? To listen to all the trees cracking, of course!!! It was like the 4th of July around our house. You could hear trees and branching going down all around us.

The power being out wasn’t too big of a deal. We had filled the bath tub with water so we could use our toilets. We had charged our laptops so we watched a couple of Smallville episodes. Jeremy’s parents were super sweet and offered to pick us up so on the main road so we could go to dinner with them. It was nice to get out of the house for a bit since I’d been home since Monday afternoon (I didn’t mind being home all that much). When we got home it was dark, no more natural light for our house. I pulled out a bunch of tea-lights and candles that I had stashed away for such a time as this. It’s crazy when you have no lights on how late it feels. We got home around 6:00pm, but with the darkness I seriously felt it was 8:00-9:00pm. After a few more Smallville episodes, Jeremy and I called it a night. It was amazing how dark things were with no house lights. 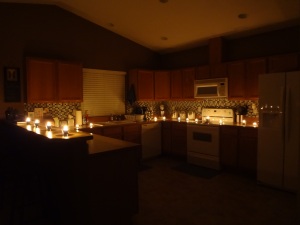 This morning, Jeremy discovered water coming out our freezer. It was starting to defrost from the lack of power. We called Jeremy’s dad, who had offered to let us borrow their generator the night before. Jeremy and I went outside to shovel the driveway so his dad could pull in. However, according to Bill we would still need chains to get into or out of our driveway. Jeremy and Bill got the generator all set up and our fridge all plugged in. Of course just a few moments later the power came on! That’s how it works!

So we are a still house bound. We have chains, but we don’t need to use them so we won’t. We’ll let the rain melt the snow a little more. Maybe tomorrow we can venture out without the help of others! It seems that wind is moving into the area tonight. The trees are still a bit icy and already slightly damaged from the ice storm. I’m still in power-outage preparedness mode. We’ll be ready if lose it again tonight. Along with wind, the snow melt poses a threat for flooding. Crazy times in Lewis County, folks!!!!