This weekend I decided to do some baking for my life group on Sunday. I’ve been posting pictures of all the yummy treats I’ve been creating and I hadn’t yet had the opportunity to share my goodies with them. They took notice and felt they needed to sample some of my baking! I was happy to accept the challenge.

As I mentioned in a previous blog, I’ve been using applesauce and apples as a theme in a lot of my baking as of late. It’s probably 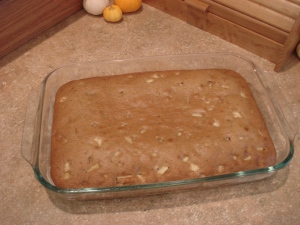 because I have so much of both ingredients around my house right now. I’d already made two different kinds of cookies with applesauce, so this time I decided to go with a spice cake recipe I found.

I love the Betty Crocker app that I have on my phone. That is where I discovered this Applesauce Spice Cake recipe with a Brown Butter Frosting. I couldn’t pass it by! The spice cake was easy to make and it smelled amazing at it baked and cooled. The frosting didn’t come to me as easy, but it still turned out pretty good!

I’ve never really browned butter before and everything I read said that it burned very easily. I’m fairly positive my butter didn’t fully brown, but I was too nervous to leave it on the stove any longer. The frosting was very easy to assemble from that point on. The trick with the frosting is that it sets on the cake pretty quickly. You need to spread it and get it how you like before it hardens.

Jeremy decided that it would be a great idea to sprinkle cinnamon on top of the cake. I’m never opposed to a stronger cinnamon flavor so I let him do it. We didn’t get as even as I would have liked, but it tasted good, so in the end it doesn’t really matter all that much. I would probably just add more cinnamon to the recipe next time and skip the sprinkling.

It’s been a lot of fun challenging myself to try and make new things. I realized I’ll never develop better skills without practice. I’m really enjoying this practice phase of my cooking/baking. Not everything has turned out Food Network worthy, but it’s all been very tasty! Overall, the best part is sharing the food I create with the ones that I love! I hope they have enjoyed the goodies as much I have enjoyed preparing them (and eating them)!